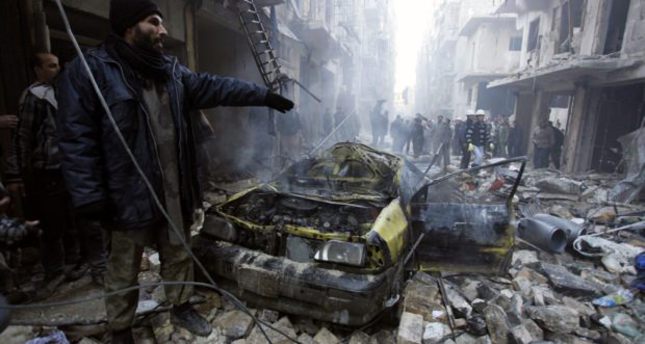 by Daily Sabah Sep 23, 2014 12:00 am
Syrian government airstrikes hit an area in Idlib province in the northwest of Syria, killing at least 42 people, including 16 children, the Syrian Observatory for Human Rights said on Monday. The attack is believed to have happened from Sunday afternoon to Sunday evening. Idlib province has been under the control of Syrian opposition force following a fierce military campaign against Bashar Assad's regime and radical Islamic State of Iraq and al-Sham (ISIS) militants.

Apart from Syrian government airstrikes, the use of chemical weapons by the Assad regime has also led to greater concerns over war crimes committed by the Syrian government. After the systematic and repeated use of chemicals by the Syrian government was reported by the Organization for the Prohibition of Chemical Weapons (OPCW), concerns were raised over Syria's compliance with international obligations over the use of chemicals. The report released said that chlorine gas was used as a weapon during attacks, holding the Syrian government responsible. The U.S. Secretary of State John Kerry stated that the OPCW report "raises especially troubling concerns that continued chemical attacks on the Syrian people by the regime could occur. The Assad regime must know that it will be held to account for such use in the international community," the Secretary of State said.
Last Update: Sep 23, 2014 9:48 am
RELATED TOPICS