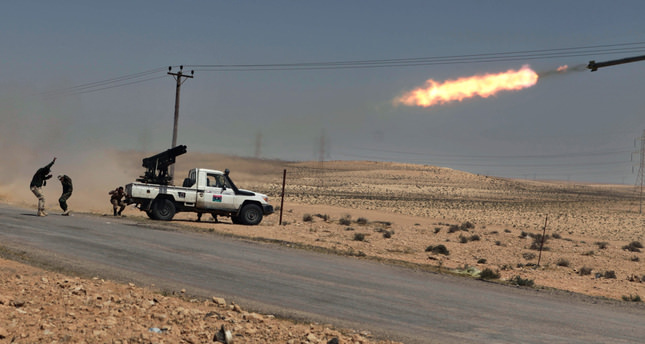 by Daily Sabah Sep 24, 2014 12:00 am
The U.N., EU and a group of 13 countries have called for a ceasefire in Libya, after the U.N. mission there proposed talks between backers of rival Libyan parliaments beginning next week. In a statement, the countries said that rivals must "accept an immediate, comprehensive cease-fire," and "engage constructively in a peaceful political dialogue" since "there is no military solution to this conflict." The communique was signed by Egypt, the United Arab Emirates, Turkey, Qatar, Algeria, the U.K., France, Germany, Italy, Saudi Arabia, Spain and Tunisia.

The communique was released following a meeting of the foreign ministers of the 13 countries and top EU and U.N. diplomats who was hosted by U.S. Secretary of State John Kerry on the sidelines of the annual U.N. General Assembly session. "We reject any outside interference in Libya," they said. "The people of Libya fought to overthrow 42 years of dictatorship, and we continue to support their effort to transform Libya into a secure democratic state." Allegedly, Egypt and the UAE have conducted airstrikes in Libya against the militants, which left at least 30 dead. However, Egypt and the UAE have not officially confirmed the claims. While clashes continue, the Libyan parliament approved a new cabinet proposed by Prime Minister Abdullah al-Thani on Monday.