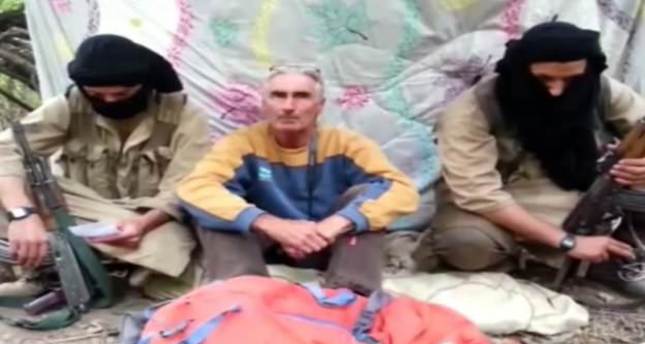 by Daily Sabah with Agencies Sep 24, 2014 12:00 am
In a video that appeared on social media, a masked member of a group calling itself Jund al-Khilafah (Soldiers of the Caliphate) threatened French President François Hollande by saying a hostage they have taken will be killed unless the airstrikes were halted within 24 hours. The group has disintegrated itself from al-Qaida and declared its loyalty to the Islamic State of Iraq and al-Sham (ISIS). The French Foreign Ministry confirmed the authenticity of the video and identified the hostage as 55-yearold Herve Gourdel.

Hollande spoke with Algerian Prime Minister Abdelmalek Sellal on the phone, the French president's office said in a statement, emphasizing the "total cooperation" between France and Algeria to try to find and free the Frenchman. It said authorities in the two countries were in constant contact. According to the Algerian Interior Ministry, Gourdel and two Algerian companions were driving through the mountains near the village of Ait Ouabane on Sunday evening when they were stopped by a group of armed men. The gunmen released the Algerians and took Gourdel, who the ministry said was a mountain guide. The three had spent the night at a ski lodge near the town of Tikdjda, 110 kilometers (65 miles) from the capital, Algiers.

In the video, the abducted French citizen said, "I am in the hands of Jund al-Khilafah, an Algerian armed group. This armed group is asking me to ask you [President François Hollande] to not intervene in Iraq. They are holding me hostage, and I ask you Mr. President to do everything to get me out of this bad situation and I thank you."

On his Facebook page, Gourdel said last week that he was off to Algeria on a hiking and spelunking adventure and was looking forward to being guided himself for a change. He also joked about "if " he would return home from Algeria.

The abduction was announced on the same day ISIS's spokesman, Abu Mohammed al-Adnani, called on supporters to attack foreigners wherever they are. In a 43-minute video, Adnani said, "If you can kill a disbelieving American or European - especially the spiteful and filthy French - or an Australian, or a Canadian, or any other disbeliever from the disbelievers waging war, including the citizens of the countries that joined a coalition against [ISIS], then rely upon God, and kill him in any manner."
Last Update: Sep 24, 2014 9:49 am
RELATED TOPICS