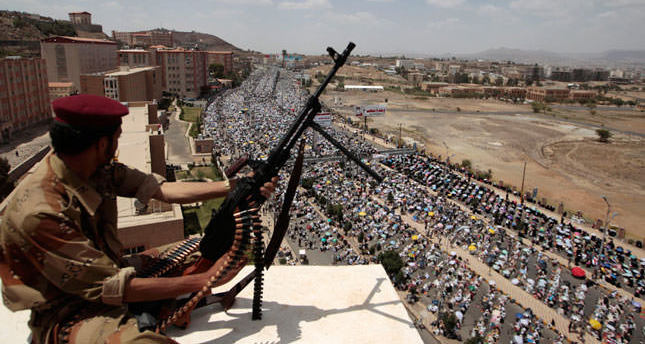 by Daily Sabah Sep 25, 2014 12:00 am
Yemeni President Abd Rabbuh Mansour Hadi has underlined the need for restoring state authority across the country, which is troubled by the Shiite Houthi group's insurgency. The president warned of a possible civil war in the predominantly Sunni country, as the Shiite group attempted to seize the capital, Sanaa. "Sanaa is facing a conspiracy that will lead to civil war," Hadi said in a speech at the presidential palace on Tuesday, two days after the rebels took control of all other key state institutions in the capital, overshadowing a U.N.-brokered peace deal.

"Many powers came together, either those who lost their interests in Yemen or those pushed by their personal grievances to take their revenge on their country rather than on an individual or the opportunistic who take advantage of any disaster to attack the country," said Hadi.

Although rebels appeared in state buildings, including the main government building, parliament, army headquarters and the central bank, alongside small detachments of military police, the Yemeni president insisted that Sanaa would not fall into the hands of the insurgents. During the clashes, at least 200 people died, according to the government.