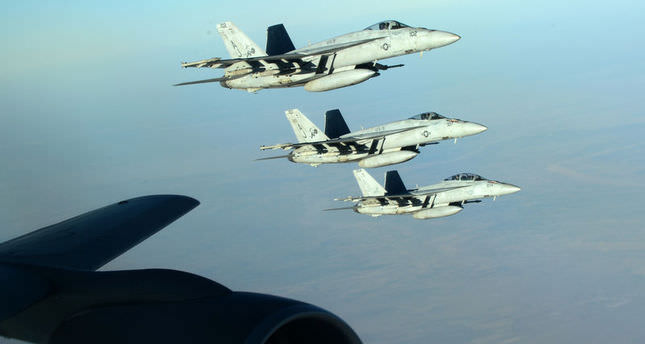 by AA Sep 26, 2014 12:00 am
Despite being a showcase of sheer military might, the ongoing U.S.-led airstrikes against radical militants in Syria and Iraq are unlikely to ultimately staunch the groups, experts warn.

The U.S. has carried out more than 200 airstrikes against the Islamic State of Iraq and al-Sham (ISIS), in Iraq, and along with partner nations has struck the group 40 times in Syria.

An additional eight airstrikes announced Tuesday were conducted unilaterally by the U.S. against the Khorasan Group - a network of seasoned al-Qaeda veterans who established a safe haven within Syria with ties to al-Qaeda affiliate the al-Nusra Front. "What's going to occur is that ISIS is going to really melt into the urban areas," David Schanzer, associate professor at the Sanford School of Public Policy at Duke University. "Once it does that there will be a diminishing array of good targets for the U.S. military and its allies to hit with airstrikes." Without a ground force to then take the fight to the militants in their urban strongholds, it is highly unlikely that the group can be completely destroyed, said Schazner. "We can certainly damage ISIS's capabilities, and I think it's a good thing we're doing that, but I think the president has made a mistake by identifying the destruction of ISIS as a strategic goal, because I don't think it will be met in anything close to the near future," he said.

In addition to hitting the group in its Iraqi and Syrian strongholds, U.S. President Barack Obama announced Sept. 10 that Washington would redouble its efforts to train Iraqi Security Forces to meet the challenges posed by militants, and would train and equip a Syrian opposition force.

"We can have reliance in Iraq on ground troops other than our own. In Syria that's not so clear," said Mark Perry, an independent military and foreign affairs analyst with extensive experience in the Middle East. But Lawrence Korb, a former Assistant Secretary of Defense under the Reagan administration and current senior fellow at the Washington-based Center for American progress think tank, cautioned that the problems posed by ISIS are unlikely to be resolved through a purely military effort. "You're not going to destroy them militarily whether its ground forces or air forces," he said. "What you want to do is weaken them so they're not a threat to the region or the world. And then you want to undermine their narrative that they're kind of the future of people who want to see Muslims get their rightful place in the world."

The participation of five Muslim nations, including Bahrain, Jordan, Qatar, Saudi Arabi, and the United Arab Emirates, in the air offensive against ISIS in Syria is pivotal in that effort, said Korb. "The strength of this coalition makes it clear to the world that this is not America's fight alone," Obama said earlier this month. "Above all, the people and governments of the Middle East are rejecting ISIS and standing up for the peace and security that the people of the region and the world deserve.

"There is no question we have the military power to defeat anybody before breakfast on any given day - that's never been the issue," said Perry. "The issue is 'to what purpose?' "