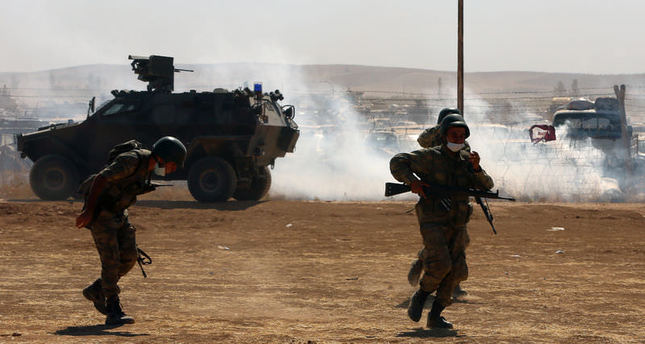 ISIS launched an offensive to try to capture the Kurdish border town of Kobani more than a week ago, besieging it from three sides. More than 140,000 Kurds have fled the town and surrounding villages since last Friday, crossing into Turkey.

The militants appeared to have taken control of a hill from where fighters from the YPG, the main Kurdish armed group in northern Syria, had been attacking them in recent days, 10 km (6 miles) west of Kobani, a Reuters correspondent said.

Booms of artillery and bursts of machinegun fire echoed across the border, and at least two shells hit a vineyard on the Turkish side. There were no immediate reports of casualties in Turkey and paramilitary police arrived to inspect the site.

Kurdish forces said on Thursday they had pushed back the advance on Kobani by ISIS militants but appealed for U.S.-led air strikes to target the insurgents' tanks and heavy armaments.

Kobani's strategic location has been blocking the militants from consolidating their gains in northern Syria. The group tried to take the town in July but was repulsed by local forces backed by Kurdish fighters from Turkey.

Turkey has been slow to join calls for a coalition to fight the group in Syria, worried in part about links between Syrian Kurds and the Kurdistan Workers Party (PKK), a militant group which waged a three-decade campaign against the Turkish state for greater Kurdish rights.

The Turkish military has in the past fired back when shells from Syria's civil war strayed into Turkish territory, and the intensifying battle for Kobani is heightening pressure on Ankara to take a more robust stance against the militants.