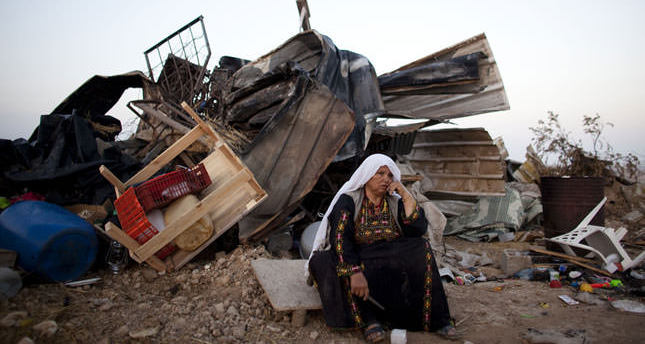 Israel has been applying an aggressive policy against the nomadic Palestinian Bedouins to forcibly move them, which may result in the extinction of Bedouin culture and lifestyle

Nomadic Bedouin tribes that live in Israel and the occupied territories have a history in the region dating back to the seventh century. During the Ottoman period and the British mandate they had no conflict with the authorities; however, since 1950 they have been one of the targets of Israeli policies. During the 1950s, Israel carried out massive evacuations of Arab villages and destroyed the areas belonging to Bedouins. The Negev desert in the southeastern part of Israel neighboring Jordan was home to the majority of Bedouins. Israel relocated the tribes to designated areas of the desert, while others fled to the West Bank. However, the lives of Bedouins, whether in the Negev, the occupied West Bank or Jerusalem are still complicated because of the state's attempts to legalize their situation, which ends with the demolition of Bedouin houses.

According to the NGO Adalah, the Legal Center for Arab Minority Rights in Israel, "The state deliberately withholds basic services from these villages to 'encourage' the Arab Bedouin citizens to give up their ancestral land." The Bedouins in the occupied West Bank have to rely on water tanks, while the neighboring illegal Jewish settlements' infrastructure needs are supplied by the state. Bedouin tribes face administrative barriers in daily life. To repair water pipes or build a water cistern they have to get official permission from the Israeli military. In 2011, 82 water structures were demolished, which was a violation of Article 53 of the Geneva Conventions. According to the article, "Any destruction by the Occupying Power of real or personal property belonging individually or collectively to private persons, or to the State, or to other public authorities, or to social or cooperative organizations, is prohibited, except where such destruction is rendered absolutely necessary by military operations."

In addition to the daily threats from the government, Bedouin tribes faced a large threat of displacement with the approval of the Prawer Plan by the Israeli government in 2011. It was the latest attempt by Tel Aviv to displace Bedouins on both sides of the Green Line, relocate and urbanize 35 unrecognized Bedouin villages with 7,000 citizens to seven Bedouin townships. More than 1,000 houses were demolished in 2011 according to this plan. During 2012, international objections were raised against it. In March 2012, the UN Committee on the Elimination for Racial Discrimination called on Israel to withdraw the proposed legislation of the Prawer Plan, calling it discriminatory. In July 2012, the European Parliament passed a historic resolution calling on Israel to stop the plan. The national and international objections to the plan in 2012 did not stop the Knesset from approving the plan in June 2013. However, facing international pushback and numerous demonstrations by Bedouins, the government shelved the plan in December.

Putting the plan on hold was only in name because demolitions in the Negev continued. The al-Araqib Bedouin village, which has been demolished 65 times, became the symbol of the struggle by tens of thousands of Bedouins. The entry of Israeli forces into the cemetery of al-Araqib in March was condemned by the Israeli NGO Rabbis for Human Rights. They wrote a letter to authorities saying: "As rabbis, we protest the desecration of this sacred ground. As people who suffer to this day from the desecration of our holy sites, we demand respect for the sanctity of the holy sites of other faiths, as we have always promised."

Half of the Negev's Bedouins have agreed to live in townships to date. There are also many people returning from the townships because of overcrowding, lack of infrastructure and jobs. Opponents of the Prawer Plan consider it a threat to the indigenous way of life. As a nomadic group that survives on agriculture and livestock, Bedouins cannot find proper conditions for their mode of life in townships." Israeli authorities have been criticized for implementing the plan with a lack of transparency and without any dialogue with Bedouins. Ex-Cabinet Minister Benny Begin, who is overlooking the plan, said that he never presented it to the Bedouin community and did not ask for their stance on the matter.

Since late August, the Israeli Civil Administration published nine plans of resettlement of rural Bedouin communities living on the periphery of Jerusalem to a new town in the Jordan Valley. The new town, Nuweimah, near Jericho, will be an alternative to the Abu Dis plan, which was frozen due to its dangerous proximity to the Abu Dis landfill. After 300 Bedouins had already been relocated to Abu Dis, Israel's Environmental Protection ministry deemed it hazardous for health. The current Israeli Defense Force (IDF) proposal sets the town of Nuweimah in between a settlement and checkpoint. Angela Godfrey-Goldstein, an advocacy officer with the Jahilin Association, pointed out that the location of Nuweimah makes future clashes inevitable as its land is unfavorable for grazing, and there are no other work opportunities. Since its founding, Israel has been trying to find a solution to its "Bedouin problem," namely how to relocate around 2,300 people from the E-1 zone on the outskirts of Jerusalem in order to ensure territorial contiguity between the city and the Jewish settlement of Maale Adummim. According to a study conducted by the UN Relief and Works Agency for Palestine Refugees in the Near East (UNRWA), since 1997 around 150 families of Bedouin refugees have been forced out of their homes in the Jerusalem district to make room for the settlement of Maale Adumim, Israel's third largest settlement bloc. Amnesty International, among other organizations, argues that forced relocation of Bedouin communities could legally be considered a war crime.