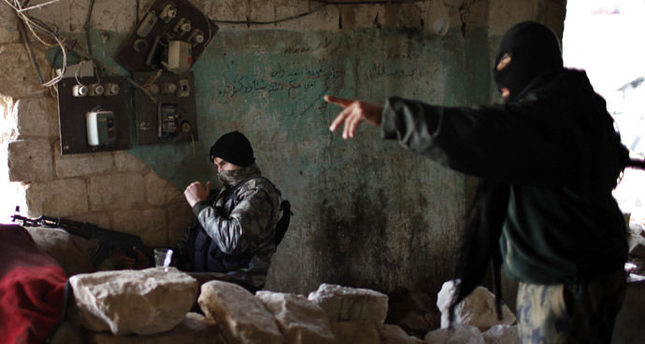 by Daily Sabah Sep 29, 2014 12:00 am
A coalition, formed to combat the Islamic State of Iraq and al-Sham (ISIS) has also hit the Nusra Front, which is the official branch of al-Qaida in Syria. The group declared that its militants will take revenge on the U.S. and the other members of the U.S.-led anti-ISIS coalition as warplanes pounded the group's headquarters. Local activists and Anadolu Agency (AA) have reported that many al-Nusra fighters, including snipers, were killed and that the group lost a large amount of ammunition.

In a video posted online on Saturday, Abu Firas al-Suri, a spokesman from al-Nusra Front threatened coalition partners: "These states have committed a horrible act that is going to put them on the list of jihadist targets throughout the world." The group said the attacks were against Islam and threatened to attack anti-ISIS coalition members, including several Arab countries. It is known, however, that that al-Nusra Front operates only in Syria and has never organized an attack outside of the country.

The attacks against al-Nusra Front were carried out by British warplanes and the strike was the first combat mission by the U.K., a day after the British parliament voted to join the U.S.-led air campaign against ISIS militants. "We can confirm that Royal Air Force Tornados continue to fly over Iraq and are now ready to be used in an attack role as and when appropriate targets are identified," a British Defense Ministry spokesman said. Two Tornado GR4 bombers supported by an air-to-air refueling aircraft took off at 7:30 a.m. GMT Saturday from RAF Akrotiri in Cyprus. "For operational security reasons, we will not be providing a running commentary on movements, but we are pleased with the response time achieved," the spokesman said. Earlier, the Defense Ministry in London said that the British jets had not fired on any targets but had delivered training material intended for Iraqi ground troops. On Friday, British lawmakers voted overwhelmingly in favor of joining the U.S.-led aerial campaign in Iraq where ISIS has been seizing large chunks of territory since June.

The Nusra Front is on the terror list of many countries including Turkey and the U.S. The group has also declared ISIS to be an enemy after ISIS broke away from al-Qaida and refused to ally with the Nusra Front.