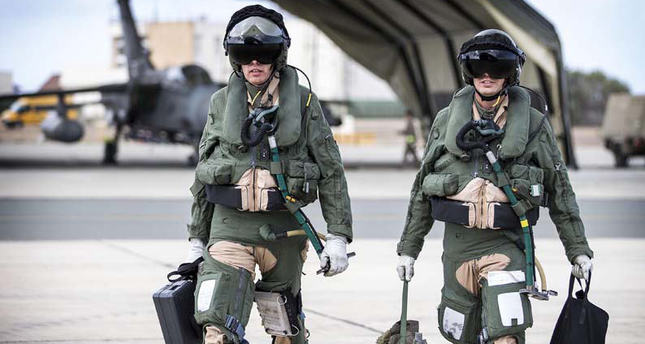 by Emre Diner Sep 29, 2014 12:00 am
British fighter jets flew their first mission over Iraq yesterday, ready to hit the self-proclaimed Islamic State of Iraq and al Sham (ISIS) targets from the Cyprus base. British fighters left Akrotiri (Cyprus base) RAF base around 10.30a.m local time.

The two Tornados, which had been accompanied by a Voyager refueling aircraft, returned to Cyprus just over seven hours later.

"Although on this occasion no targets were identified as requiring immediate air attack by our aircraft, the intelligence gathered by the Tornados' highly sophisticated surveillance equipment will be invaluable to the Iraqi authorities and their coalition partners in developing the best possible understanding of ISIS's disposition and help acquire potential targets for future operations, either by aircraft or Iraqi ground forces," a British Ministry of Defence spokesman said.

Ministers had cautioned not to expect a campaign of "shock and awe" and that after weeks of US air strikes in the area it could take time to identify new targets.

"We know that the very presence of coalition air power over Iraq has a significant impact on ISIS's efforts to attack the Iraqi people," the MoD spokesman said.

"With no effective defence against air strikes, and knowing the precision with which coalition aircraft can hit them, the terrorists are forced to be much more cautious, keeping their forces dispersed and movement inhibited.

"They also know that should they concentrate to deliver an attack against Iraqi or Kurdish troops, aircrafts are likely to arrive overhead very soon afterwards."

The mission was the first since the British parliament authorised strikes against ISIS militants there, Britain's Ministry of Defence said earlier yesterday.