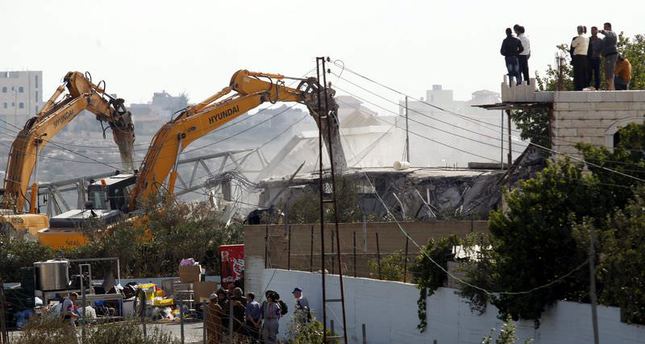 by AA Sep 29, 2014 12:00 am
On Monday, Israeli bulldozers demolished a Palestinian residential building in occupied East Jerusalem's Abu Dis neighborhood on the pretext that it had been built illegally, eyewitnesses said.

Motasem Adeleh, owner of the building, told reporters that the five-story building was built in 1959 after a permit was obtained from the Palestinian Authority.

However, Israel's Jerusalem municipality recently issued a demolition order for the house under the allegation that it was built without a permit, he said.

"We made several appeals against the decision but to no avail," he added.

Israel occupied East Jerusalem during the 1967 Six-Day War. It later annexed the holy city in 1980, claiming Jerusalem as the unified capital of the self-proclaimed Jewish state – a move never recognized by the international community.

Sacred to Muslims, Jews and Christians, Jerusalem is home to the Al-Aqsa Mosque, which for Muslims represents the world's third holiest site. Jews refer to the area as the "Temple Mount," claiming it was the site of two prominent Jewish temples in ancient times.

Palestinians also complain that Israeli municipal authorities impose tight restrictions on the building and renovation of Palestinian homes in the holy city.