ISIS and Nusra Front could realign after US-led airstrikes 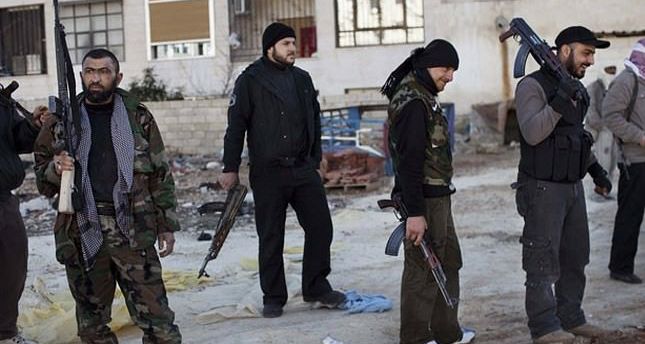 by Daily Sabah Sep 30, 2014 12:00 am
According to British newspaper The Independent, Islamic State of Iraq and al-Sham (ISIS) fighters have been seeking ways to ally with al-Qaida's Syrian branch al-Nusra Front to take on the ongoing airstrikes, carried out by the U.S.-led coalition. ISIS and Nusra Front were previously unified in their fight against the Bashar Assad regime in Syria. But Nusra Front declared ISIS an enemy after ISIS broke away from al-Qaida and refused to ally with Nusra Front.

The disintegration happened one year ago after ISIS leader Abu Bakr al-Baghdadi demanded Nusra fighters pledge allegiance to him. After Nusra Front invited ISIS to remain part of al-Qaida and recognize Nusra Front as the only al-Qaida branch in Syria, ISIS declared that it was moving alone in the region. ISIS has also declared al-Qaida and Nusra Front leaders and fighters as heretics and enemies. It was reported that ISIS has seized many Nusra Front-held areas through raids on their former ally.

However, the recent coalition airstrikes may bring the two groups together. A new alliance may emerge between ISIS and Nusra Front. Two days ago, British warplanes pounded Nusra Front's headquarters and killed dozens of its fighters. In response to the attacks, Nusra's official spokesperson, Abu Firas al-Suri, threatened the coalition nations with retaliation on Saturday. He said "These states have committed a horrible act that is going to put them on the list of jihadist targets throughout the world. This is not a war against Nusra, but a war against Islam." Another British newspaper, the Guardian, reported that Nusra Front and ISIS leaders were planning attacks together but no formal alliance has been confirmed.

On the brink of a new alliance, another opposition group in Syria, the Islamic Front, said that its fighters carried out attacks on ISIS's headquarters near Aleppo. Islamic Front's Aleppo representative Abu Ali al-Hur told Anadolu Agency they attacked ISIS fighters to prevent them from raiding rebel-held areas.

Despite the attacks on ISIS from the U.S.-led coalition, Islamic Front in Syria and the Iraqi army in Iraq are fighting with Kurdish factions to seize the Kurdish town of Kobani in Syria. It was also reported that the group has made advances to Iraqi capital Baghdad. According to the Foundation for Relief and Reconciliation in the Middle East, ISIS was approaching the Iraqi capital on Monday morning. "The Islamic State are now less than 2 kilometers away from entering Baghdad. They said it could never happen and now it almost has. Obama says he overestimated what the Iraqi Army could do. Well, you only need to be here a very short while to know they can do very little," a spokesperson said.