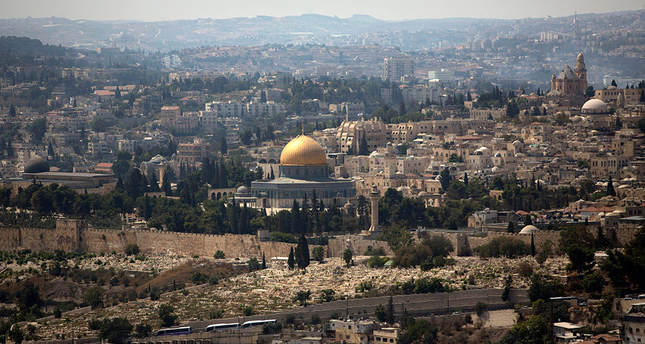 by Sep 30, 2014 12:00 am
Scores of Jewish settlers on Tuesday forced their way into the Al-Aqsa Mosque compound in occupied East Jerusalem under Israeli police protection, a Palestinian official has said.

"A total of 210 Jewish settlers, under the protection of Israeli [police] special forces, toured the compound and attempted to perform Talmudic rituals near the Dome of the Rock Mosque," Sheikh Omar al-Qiswani, the Palestinian director of the Al-Aqsa complex, told Anadolu Agency.

Palestinian compound employees and guards were deployed in the compound's courtyards to prevent any attempt by Jewish settlers to preform religious rituals, al-Qiswani added.

Meanwhile, Israeli police imposed fresh restrictions at the gates of the Al-Aqsa compound, barring all men under the age of 45 from entering the holy site.

Jews, for their part, refer to the area as the "Temple Mount," claiming it was the site of two prominent Jewish temples in ancient times, and performing Jewish prayers over the area is forbidden by the Chief Rabbinate of Israel. This restriction is often strictly supervised by Israeli security forces to prevent possible conflicts between the two groups.

In September 2000, a visit to the site by controversial Israeli leader Ariel Sharon sparked what later became known as the "Second Intifada," a popular uprising against the Israeli occupation in which thousands of Palestinians were killed.