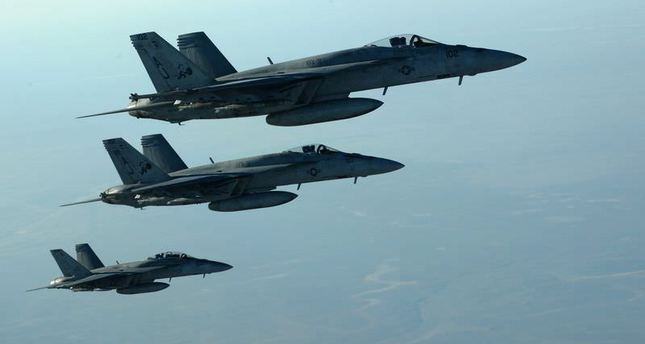 by Daily Sabah Sep 30, 2014 12:00 am
The airstrikes, carried out by the U.S.-led coalition against the Islamic State of Iraq and al-Sham (ISIS) in Syria have started posing problems for the moderate and legitimate Syrian opposition groups who have been calling for U.S. airstrikes for years since the attacks have caused civilian casualties. Reportedly more than 50 civilians died in the strikes last week and the number is likely to increase as ISIS militants use residential areas to plan their attacks and meet everyday needs.

According to Reuters news agency, the opposition is facing a backlash from Syrians angered by the offensive as they have been kept in the dark about the airstrikes against their enemy ISIS. The rebels say civilian casualties from the week-old air campaign and suspicion of U.S. motives are endangering the public support they have gained during their fight against Syrian President Bashar Assad. "There is popular anger toward us," said rebel commander Ahmed al-Seoud, who defected from the Syrian army in 2012 and leads a rebel group known as the 13th Division.

His group defines itself as part of the Free Syrian Army (FSA), loosely affiliated non-Islamist factions, some of which are backed by donors including the U.S. and Gulf countries that have supported the uprising against Assad. The 13th Division boasts 1,700 fighters and is in need of everything from boots to arms even though it has been a recipient of foreign aid. Its position as a Western-backed group means people see it as supporting the airstrikes, said Seoud. "We support airstrikes, but airstrikes against [ISIS] and the regime," he said in an interview in the Turkish town of Reyhanlı near the Syrian border.

Opposition groups claim that the U.S. and other members of the international coalition must also take action against the Assad regime. The regime, which shells residential areas causing the deaths of hundreds of people every week, must be toppled, according to opposition members. However, the U.S. has not signaled any intention to remove Assad, despite refusing any alliance with the regime through claiming that the regime has no legitimacy.

Abu Abdo Salabman from the political office of the Mujahideen Army, an FSA-affiliated group with reportedly 7,000 personnel told Reuters, "It is not to our advantage to fight ISIS at this time just because some Tomahawks are falling on them without knowing that the regime has completely lost air supremacy over us. They will bomb us out and take any advances we have made. It will be like we are cooking the meal for the regime to eat in the end."

The fighters also said that they are not receiving more weapons. The U.S. has, however, already trained some 5,000 fighters and, Chairman of the U.S. Joint Chiefs of Staff General Martin Dempsey, said in a statement on Friday that a Western-backed opposition force of around 12,000 to 15,000 fighters would be needed to retake areas of Syria controlled by ISIS.