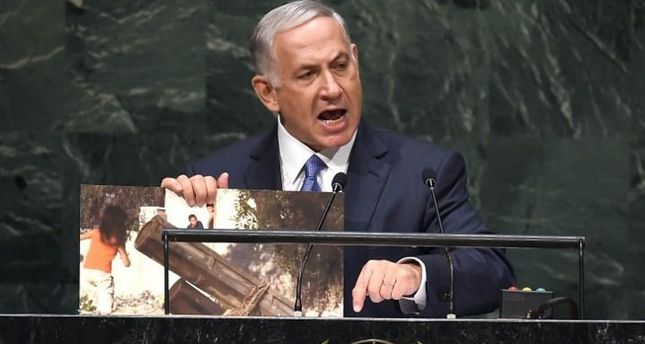 by Daily Sabah Sep 30, 2014 12:00 am
Israeli Prime Minister Benjamin Netanyahu blamed Hamas for the devastation during the 50-day war in Gaza in his Monday speech at the U.N. General Assembly. He likened Hamas to the Islamic State of Iraq and al-Sham (ISIS) arguing that both share the same goal of world domination. Israeli prime minister also accused the U.N. Human Rights Council of anti-Semitism, referring to the council's criticisms on Israel.

Netanyahu answered the accusations of Palestinian Authority's leader Mahmoud Abbas at U.N. as well. In his speech on Friday, Abbas alleged Israel of conducting a "war of genocide" during this summer's 50-day war in Gaza, saying the Israeli military targeted civilians and committed war crimes. He accused Israel of undermining every opportunity for peace negotiations by continuing to occupy Palestinian lands with the building of new settlements. Netanyahu responded by saying that Hamas committed "the real war crimes" in Gaza by using Palestinian civilians as human shields. Netanyahu called on Abbas to take responsibility for the actions of Hamas, as Palestinian Authority's partner in the unity government of Gaza and the West Bank.

Netanyahu likened Israeli attacks on Gaza to the U.S.-led airstrikes against ISIS. According to him, ISIS and Hamas are "branches of the same poisonous tree" sharing the goal of world domination, just as the Nazis did. "Both [are] bent on world domination through terror, just as the Nazis were. The Nazis believed in a master race, the militant Islamists believe in a master fait," he said. In his speech, Netanyahu also denounced the U.N Human Rights Council for becoming "a terrorist rights council." He accused the Council of continuous criticism of Israel, which reflects "the return of one of the world's oldest prejudices, called anti-Semitism."

Palestinian leaders opposed the accusations of Netanyahu. "Netanyahu's statements are an attempt to mix cards," Hamas spokesman Sami Abu Zuhri told Anadolu Agency (AA) on Monday. He said, "The Israeli occupation is the source of evil and terrorism in the world," and dismissed the allegations that Hamas had used Palestinians as "human shields" during the recent Israeli offensive. "How can Netanyahu justify the killing of more than 500 children during the Israeli aggression on Gaza?" he asked.

In an interview with Al-Jazeera, Riyad Mansour, the Palestinian Authority's ambassador to the U.N., said the Israeli leader "came to the General Assembly with a bunch of lies." Mansour said that Netanyahu is trying to brand Hamas as a "terrorist organization" to prevent a unity government between Hamas and Fatah, and stop the creation of an independent Palestinian state. Saeb Erekat, chief Palestinian negotiator, said that Netanyahu's remarks "buried" the possibility of a two-state solution to the Arab-Israeli conflict based on the pre-war borders of 1967. Erekat also criticized Netanyahu for branding those who dare to stand up to Israel as anti-Semites.

According the Walla news portal, on Monday, the Israeli Defense Forces (IDF) announced the building of a "smart" fence enclosing the settlements near the Gaza Strip following the arrest of a Palestinian who had infiltrated into Israel from Gaza. The alarm system of the planned fence will alert regional councils to any infiltration attempts.