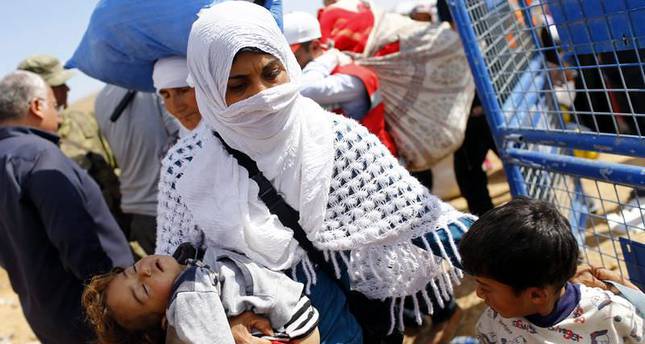 by AA Sep 30, 2014 12:00 am
Syrian refugees who recently arrived in Turkey have described horrific scenes of children being slaughtered by ISIS militants, World Food Program (WFP) said on Tuesday.

"The families are in desperate conditions. Some described horrific scenes of children being slaughtered by ISIS forces," the World Food Program spokeswoman Elisabeth Byrs said in a press conference on Tuesday, at the U.N. headquarters in Geneva.

Turkey is facing a massive influx of more than 160,000 Kurdish refugees from the Syrian border town of Kobani who has been attacked by ISIS militants.

"To deal with the largest influx of Syrian refugees since the start of the crisis, the Turkish government has requested support [from the World Food Program]," she said.

Byrs said that 25 trucks of dry food rations (450 tons) would reach the southeastern Turkish cities of Gazientep and Suruc on Wednesday afternoon.

"[We] will start distributing hot meals on Thursday. The distribution targets 60,000 refugees for a period of two weeks," she said.

However, the organization added that they are facing severe funding gaps that will affect operations in October.