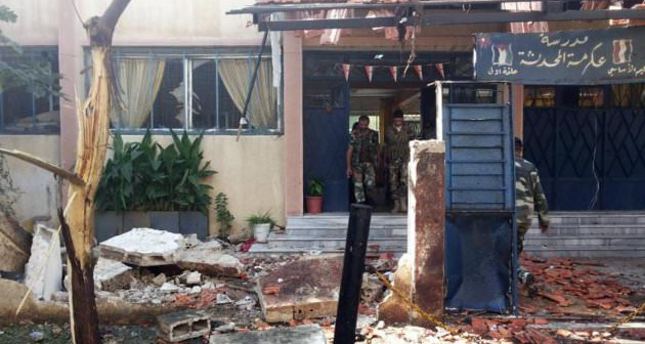 by Oct 01, 2014 12:00 am
At least 30 Syrian children were killed Wednesday in a double bombing by a lone assailant at a school in the government-controlled city of Homs, a monitoring group said.

They were among 39 people who died in the attack in the Akrameh neighbourhood, according to a new toll from the Syrian Observatory for Human Rights.

"At least 30 children were among 39 people killed in the double bombing at the Akrameh al-Makhzumi school in Homs today," said Observatory director Rami Abdel Rahman.

One suicide attacker carried out both of the bombings.

"He planted a bomb at one location at the school, and then blew himself up at another spot nearby," Abdel Rahman told AFP.

But Al-Qaeda's branch in Syria, Al-Nusra Front, said it was behind a similar twin bombing in the central city that killed at least 12 people in May.
Speaking to AFP on Wednesday, Homs governor Talal al-Barazi had also reported the deadly attacks, giving a toll of 31 killed and 74 wounded.

The children were between six and nine years old, he added.

The toll is among the highest for children in suicide attacks across Syria since the conflict erupted in the country three years ago.

In August 2013, a chemical attack on rebel areas in the outskirts of Damascus killed dozens of children, and the year before 49 children were killed in the Houla "massacre" in Homs province.

Homs' Akrameh neighbourhood is home to a majority of Alawites, members of the same offshoot of Shiite Islam to which Bashar al-Assad belongs.

The district has been targeted more than once before, including on June 19, when at least six people were killed in a car bomb attack.

Homs was once dubbed "the capital of the revolution" against Assad. Most of the city, except the battered district of Waar, has returned to regime control after two years of bombardment and siege.