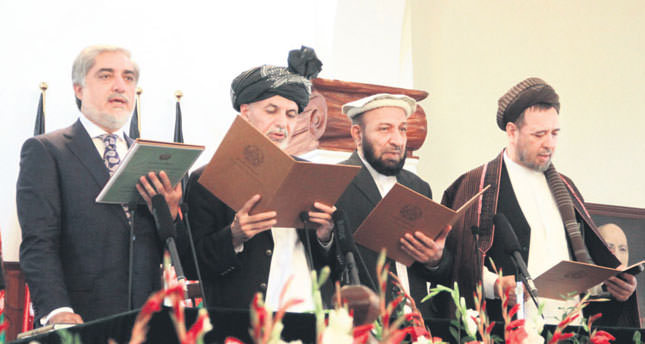 The future of long-troubled Afghanistan, frequently shaken by Taliban attacks and foreign invasion forces for decades, will be strenghtened by the new president and other key political figures

Ashraf Ghani Ahmadzai has finally moved into the historic presidential palace in the heart of the Afghan capital following months of political wrangling, intimidation and uncertainty.

However, the former World Bank economist, who served in various high-profile posts during Hamid Karzai's government, will have to steer the government in close alliance with his former presidential rival Abdullah Abdullah, among scores of dominant figures with influence and command beyond the government.

Hailing from an influential Pashtun family, President Ghani has earned a great deal of respect as a reformer and an administrator though his image was tainted by allegations of vote rigging, which his team denied. Ghani has avoided Afghanistan's bloody political scene, studying abroad and later serving organizations such as the World Bank and the U.N.

As the finance minister, he was celebrated by Bloomberg News and later, his service as the Chancellor of Kabul University was also commented on. Lately, in the drawn out presidential campaign, he proved his political acumen by making important alliances and adopting a moderate agenda.

Born to an ethnic Tajik mother and a Pashtun father, Abdullah has emerged as the heir to Ahmad Shah Massoud, the iconic anti-Soviet resistance commander from northern Panjshir province. Although Massoud's brother Ahmad Zia Massoud supported Ghani, many believe the long and close association between Abdullah and Massoud during the Soviet-era and later during the civil war earned the newly elected Chief Executive support of the north. His followers now control most of the northern provinces and many ministries in Kabul.

The former army general is a symbol of strength with thousands of disciplined fighters now serving the Afghan National Army. Controlling much of the country's north-west, Dostum has secured the vice president's seat for himself in return for his vital support for Ghani. Dostum is recognized as the leader of the country's third biggest ethnic group, the Uzbeks.

Atta, who has been ruling the northern Balk province as its exclusive leader for the past decade, is arguably the fiercest critic of Ghani in Abdullah's camp. A former member of the anti-Taliban Northern Alliance during the civil war, Atta fearlessly challenged Karzai's authority when he was in power. An ethnic Tajik, he holds the key to many northern provinces and is likely to retain his post in the unity government.

As a close aide to Ghani, Massoud is notable for his harsh criticism of Abdullah and his supporters. Though he does not have enough backing in the Tajik community to challenge Abdullah and Atta, the mere fact that he is brother to the slain Afghan hero Ahmad Shah Massoud and the son-in-law of former president Burhanuddin Rabbani, gives him an edge that could come in handy while serving as Ghani's special representative on reform and good governance.

An ethnic Hazara, Muhaqiq's control over the country's fourth biggest ethnic group is doubted by many with the emergence of former vice president Karim Khalili and new vice president Sarwar Danish. However, his close alliance with Abdullah's camp and his aggressive style of politics mark him as an important figure for the future as deputy to Abdullah.

Barakzai, hailing from a conservative Pashtun tribe from the south, has made her mark not just on Afghanistan but internationally as a liberal female politician in male-dominated and tribal Afghan society. She played an important role in Ghani's campaign and is likely to shine once again alongside First Lady Rula Ghani Ahmadzai in the new regime.

Cousin to the former president, Hakmat is a young, educated and emerging leader in southern Kandahar province. Hekmat and his slain elder brother Hashmat, killed in a suicide attack earlier this year, were instrumental in mobilizing voters for Ghani in the troubled southern provinces.

Hamdard, governor of south-eastern Paktia province, has a similar track record to Dostum and Atta but his political clout has been diminished by the exile of his former leader Gulbuddin Hekmatyar and the fact that their party, Hizb al-Islami, had been fighting the government. Currently a Ghani supporter, Hamdard balances Atta's influence in their hometown Mazar al-Sharif.

This former chief election commissioner threw his weight behind Abdullah in the presidential campaign. He has served in various high profile positions in the judiciary and is likely to get one once again as Ghani and Abdullah form the cabinet.