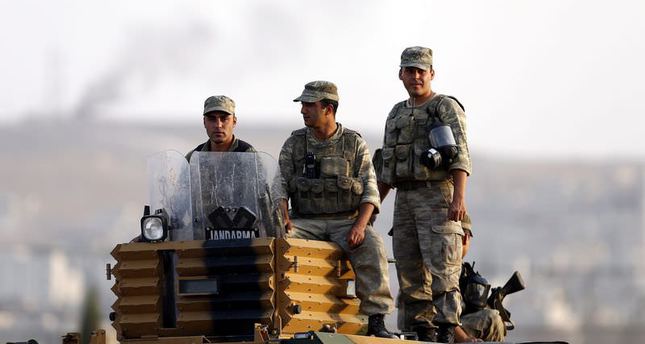 by Associated Press Oct 03, 2014 12:00 am
Kurdish fighters battled ISIS fighters Friday near a Syrian Kurdish town along the border with Turkey as Turkish prime minister said his country will prevent the fall of Kobani.

The Kurdish town and its surrounding have been under attack since mid-September, with militants capturing dozens of nearby Kurdish villages. The assault, which has forced some 160,000 Syrians to flee, has left the Kurdish militiamen scrambling to repel the militants' advance into the outskirts of Kobani, also known as Ayn Arab.

The Britain-based Syrian Observatory for Human Rights, which monitors Syria's civil war, reported intense fighting Friday to the east and southeast of Kobani. The Observatory said seven ISIS fighters were killed in a village near Kobani.

Ismet Sheikh Hassan, the Kurdish defense minister of Kobani region, said ISIS fighters were trying to advance from the east, west and southeast of Kobani. He said militants fired rockets on the town and called on the U.S.-led coalition "to hit the tanks instead of bases."

The latest round of fighting over Kobani came after Turkish Prime Minister Ahmet Davutoglu told Turkey's ATV television station late Thursday that his government does not want Kobani to be captured.

Asked what will happen if Kobani falls, Davutoglu said: "We would not want Kobani to fall. We have opened our arms to our brothers who have come from Kobani. We would do whatever is necessary, our utmost to prevent Kobani's fall."

Davutoglu did not elaborate. His comments came after Turkey's parliament gave the government new powers Thursday to launch military incursions into Syria and Iraq, and to allow foreign forces to use its territory for possible operations against the ISIS.

On Friday, Syria's Foreign Ministry warned Turkey that deploying troops inside its borders will be seen as an "aggression," calling on the international community to "put limits to the adventures" of the Turkish leadership.

Turkey has been one of the strongest backers of Syrian opposition groups trying to remove President Bashar Assad for power.

When asked about Davutoglu's statement, Nawaf Khalil, a spokesman for Syria's leading Kurdish Democratic Union Party, said: "How does he want to prevent the fall of Kobani and until now Turkey has done nothing."

Khalil added that Kobani is now almost empty of civilians and that the situation around the town "is very dangerous." He said Kurdish fighters in the town "will fight until the last gunman and last gunwoman."

Also Friday, the Observatory and Syrian state media said government forces advanced in northern Aleppo province, capturing three villages including Handarat. The capture of the villages tightens government control of areas linking the contested city of Aleppo with other parts of the province.

The Observatory and the Local Coordination Committees, which also monitors Syria's 3-1/2-year civil war, reported several airstrikes by the coalition targeting ISIS positions in the northern provinces of Raqqa and Aleppo, as well as the eastern oil-rich region of Deir el-Zour that borders Iraq.

U.S. Central Command said the coalition on Thursday and Friday continued its airstrikes, destroying an ISIS garrison in the northeastern province of Hassakeh and two tanks in Deir el-Zour. It said two strikes north of Raqqa hit two modular oil refineries and a militant training camp. It said another strike northeast of Aleppo struck a building occupied by the ISIS.

Meanwhile, the United Nations children's agency, UNICEF, welcomed the release of nearly 70 Kurdish children who spent four months in captivity with the ISIS. The children, who were released this week, had been held since May 29, when they captured while on their way from Kobani to take final school exams.

UNICEF spokesman Christophe Boulierac told the AP in Geneva that between 50 and 70 students are still being held.