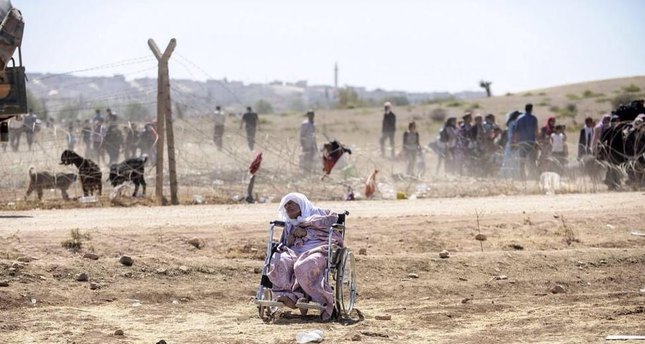 by Daily Sabah with Agencies Oct 03, 2014 12:00 am
The U.S.-led coalition, organized to eradicate the Islamic State of Iraq and al-Sham (ISIS), yesterday continued their aerial assault, killing dozens of ISIS militants. On Wednesday, five airstrikes were carried out in Kobani (Ain al-Arab). The Britain-based Syrian Observatory for Human Rights reported that the strikes hit ISIS positions south and southeast of the town and killed more than 10 fighters. "Kurdish fighters on the front lines saw the bodies literally being thrown into the air" by the force of the blast, said Observatory director Rami Abdel Rahman.

Despite the bombardment, ISIS militants have besieged Kobani and continue to make advances. "The fighting in the past 24 hours has been the fiercest since ISIS began its offensive a fortnight ago. Fighting intensified at dawn Thursday between Islamic State militants and the Kurdish People's Protection Units (YPG) at the western outskirts of the city of Kobani, prompting the YPG to withdraw from the area to the outskirts of the city, while militants advanced," said Abdel Rahman. "There are real fears for the Kurds' capacity to resist, as ISIS are using tanks and other heavy weaponry in their attack," he added. Abdel Rahman said the Kurdish fighters were vastly outnumbered and outgunned in the fight for Kobani. "Though they are fewer in number and are militarily worse equipped, the Kurdish fighters refuse to withdraw and are fiercely defending their town. For them, it is a matter of life or death," he said. "The Kurds are armed with Kalashnikov rifles, Soviet-era DShK machine guns and RPGs," Abdel Rahman said. "ISIS has brought in the weapons they seized from Mosul, Iraq's second largest city, and the Tabqa airbase, in Syria's Raqqa province," he added.

ISIS seized large stocks of heavy weaponry from fleeing Iraqi troops when they captured Mosul in June. They took more when they overran the Syrian army garrison at Tabqa in late August. Kurdish leaders have appealed to the U.S.-led coalition battling ISIS to provide air support to the town's defenders.

The Observatory had earlier reported that at least 10 people had been executed by the group on Tuesday, including a civilian and three Kurdish female fighters, who were beheaded. A Kurdish male fighter was beheaded along with the women, and another five fighters were also executed in a separate incident in the area, according the Observatory.