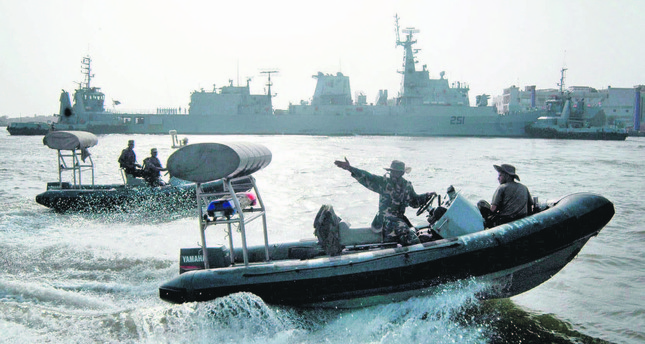 Months after Owais Jakhrani was sacked from the Pakistan navy for radical views on religious jurisprudence, he led an audacious mission to take over a warship and turn its guns on a U.S. naval vessel in the open seas. The early September dawn raid at a naval base in the southern city of Karachi was thwarted, but not before Jakhrani, two officers and an unidentified fourth assailant snuck past a patrol boat in a dinghy and engaged in an intense firefight on or around the warship, PNS Zulfiqar. Four people were killed in the attempt to hijack the Zulfiqar, including Jakhrani and two accomplices, who were serving sub-lieutenants, according to police reports seen by Reuters. Officials are divided about how much support the young man in his mid-20s had from inside the navy. They also stress that Jakhrani and his accomplices were a long way from achieving their aim when they were killed. But the attack, claimed by al Qaida's newly created South Asian wing, has highlighted the threat of militant infiltration into Pakistan's nuclear-armed military.

The issue is a sensitive one for Pakistan's armed forces, which have received billions of dollars of U.S. aid since 2001 when they joined Washington's global campaign against al Qaida. According to an initial statement from al Qaida, the plan was to use the Zulfiqar to attack a U.S. navy vessel, meaning potential loss of American lives and a blow to relations between the two nations.

A further statement issued by the group identified the target as USS Supply, a US naval ship used to refuel warships at sea. The Indian navy was also a target, the statement said. It urged followers to "make jihad on the seas one of their priorities," according to the SITE intelligence group, which monitors extremist communications. A naval spokesman said an inquiry was still ongoing when Reuters contacted the military with detailed questions about the incident. The military typically does not publish its inquiries. "The Reuters story is not based on facts," he said. "All the facts will be ascertained once the inquiry is finalized." Most Pakistani military officials deny infiltration is a significant problem. Yet Defense Minister Khawaja Asif told parliament the attackers could only have breached security with inside help.

One navy official, speaking on condition of anonymity because he was not authorized to talk to the press, said at least eight navy personnel had been arrested based on the attackers' phone records, including four aboard the Zulfiqar. Three serving mid-level lieutenant commanders from Karachi were also arrested in the western city of Quetta, allegedly trying to flee to Afghanistan two days after the botched raid, officials said.

The plot's mastermind was sub-lieutenant Jakhrani, either 25 or 26 years old, whose father is a senior police officer in Karachi, officials said. He was fired several months ago during his probationary training period, according to a senior naval officer.

Earlier this year, Jakhrani traveled to Afghanistan to meet militant leaders and receive combat training, according to two officials. They said that he had told his bosses before departing that he needed to take leave to study for exams. But Jakhrani failed his exams and alarmed colleagues with his militant views. Once he left the navy, information on his movements and plans was patchy.

Intelligence officials tipped off the navy days before the attack that a raid was imminent, according to two officials. But Jakhrani, who had an insider's knowledge of the Karachi base, did not appear to be closely monitored. Imtiaz Gul, head of the Islamabad-based think tank the Centre for Research and Security Studies, said senior generals were aware of a long-standing weakness in surveillance of military officials dismissed for extremism. "They don't have a tracking system for officers who are dismissed or asked to leave the service (for radical views)," said Gul. "That makes it very difficult to track if they have joined extremist groups." Chris Rawley, vice president of the Washington D.C.-based think tank the Center for International Maritime Security, said the attack never looked likely to succeed. But underlining one of the United States' biggest fears, he added: "The fact that maybe there are some collaborators in the navy is worrying because maybe there are collaborators among others that have purview over nuclear weapons."

Similar fears about militant infiltration and the sympathies of junior officers were raised after sophisticated attacks penetrated a Karachi naval base in 2011 and the army's headquarters in Rawalpindi in 2009. The Karachi attack came two days after al Qaida chief Ayman al-Zawahri announced the formation of a new wing, al Qaida in the Indian Subcontinent. The statement threatened U.S. naval allies that seek to secure maritime routes and prevent the movement of militants. It claimed that fighters had launched an attack aboard the Zulfiqar and another ship, the PNS Aslat, and had killed many naval officers. Militants have launched attacks on top Pakistani security installations before, but this plot sought to strike at the heart of the alliance between Pakistan and the United States. At least four attackers wearing navy uniforms snuck past the patrol boat, arriving at the Zulfiqar as the dawn shift change was due, a navy official said. A sailor on board challenged them, leading to a shootout that ended when the ship's gunner fired anti-ship guns at the attackers, according to the navy official and the police report. In total, three attackers and one sailor were killed, police reports and autopsies showed.