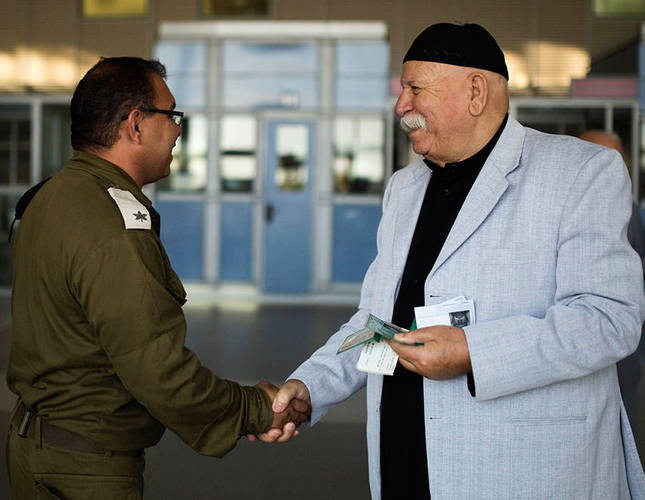 by Oct 05, 2014 12:00 am
Hundreds of elderly Gazans paid a rare visit to Jerusalem's Al-Aqsa mosque compound on Sunday after Israel eased tight restrictions on movement over the Muslim holiday of Eid al-Adha.

It was the first time since 2007 that Muslim worshippers from Gaza were granted permission to travel to the ancient shrine in Jerusalem's Old City, an Israeli rights group said.

The move to ease access over the Muslim feast of sacrifice was announced by Israel just over a month after a ceasefire ended a 50-day war in Gaza which killed almost 2,200 Palestinians and 73 on the Israeli side.

Under the terms of the deal, Israel agreed to ease restrictions limiting Palestinians' freedom of movement.

The Israeli army said in a statement that it had given permits to 500 Gaza residents over the age of 60 to visit the plaza to celebrate the three-day holiday which began on Saturday.

The 500-strong group arrived at the Al-Aqsa mosque plaza in Jerusalem's Old City during the morning and were allowed to stay there until 3:00 pm (1200 GMT), after which they were taken back to the Gaza border, an AFP correspondent said.

Many hadn't visited the shrine, the third holiest site in Islam, in decades, kissing the ground as they entered the sprawling plaza.

"I haven't been here for 35 years. Everything has changed," smiled Umm Dallaleh Fayyad, a woman in a black abaya and a vibrant blue headscarf.

The move was hailed by Gisha, an Israeli NGO which fights for freedom of access and movement for Palestinians, which had repeatedly petitioned the courts over the matter, without success.

"This hasn't happened since 2007. Christians could leave (for religious holidays) but not Muslims," said Gisha spokeswoman Shai Grunberg.

Gazans' freedom of movement has been restricted since 2007 when Hamas seized control of the territory, prompting Israel to significantly tighten a blockade imposed a year earlier after militants there seized an Israeli soldier.