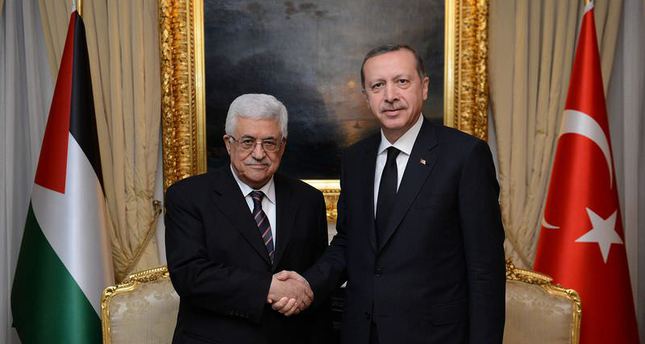 by AA Oct 08, 2014 12:00 am
Palestinian Authority President Mahmoud Abbas on Wednesday received a phone call from Turkish President Recep Tayyip Erdoğan during which they discussed Israeli violations in Palestinian territories in general and in occupied Jerusalem in particular, local Palestinian media has reported.

It added that these violations included help offered by Israeli authorities for extremist settlers to enter Al-Aqsa mosque.

The conversation, the agency said, also focused on efforts made for the reconstruction of the Gaza Strip and a Palestinian bid to resort to the United Nations Security Council.

"Abbas said that the Palestinian leadership would refer the whole Palestinian cause as well as Israeli violations against holy sites to the Security Council," the agency said.

Shortly afterward, over 60 Jewish settlers forced their way into the compound under the protection of Israeli police after Muslim worshippers were forcibly ejected from the holy site.