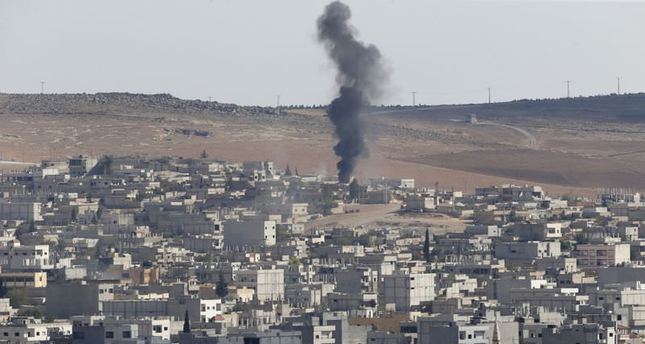 by Oct 09, 2014 12:00 am
ISIS militants have seized more than a third of the Syrian Kurdish border town of Kobani despite U.S.-led air strikes targeting them in and around the town, a monitoring group said on Thursday.

They moved into two districts on Wednesday in a three-week battle that Kurdish defenders say will end in a massacre and give the militants a garrison on the Turkish border if they win.

The Syrian Observatory for Human Rights, which monitors the country's civil war, said clashes continued into Thursday morning as the militants of ISIS pushed forward.

"ISIS control more than a third of Kobani. All eastern areas, a small part of the northeast and an area in the southeast," the Observatory's head, Rami Abdulrahman, said by telephone.

An explosion was heard on Thursday on the western side of the mainly Kurdish town, with thick black smoke visible from the Turkish border a few kilometres (miles) away. The sound of a jet flying overhead and sporadic gunfire from the besieged town was audible. Several ambulances sped from the border to the town of Suruç in Turkey.

ISIS hoisted its black flag on the eastern edge of Kobani on Monday. Since then, the air strikes have been redoubled but failed to halt the advance.

In Washington, the Pentagon cautioned that there are limits to what the air strikes can do in Syria before Western-backed, moderate Syrian opposition forces are strong enough to repel the group. U.S. President Barack Obama has ruled out sending American ground forces on a combat mission there.

Kurds have complained that Washington is giving only token support through its air strikes, which are focused in Iraq where the United States works with the Iraqi Army.

Secretary of State John Kerry said on Wednesday: "As horrific as it is to watch in real time what is happening in Kobani ... you have to step back and understand the strategic objective."