ISIS controls more than one third of Kobani 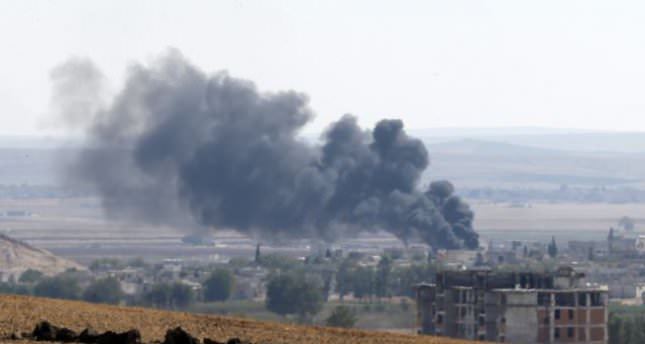 ISIS militants have entered parts of Kobani, controlling one third of the town, according to local sources. Street-to-street fighting continues between ISIS and the Kurdish groups

Islamic State of Iraq and al-Sham (ISIS) militants have begun controlling more than one third of the Kurdish town of Kobani (Any al-Arab) in Syria. However, the commander of Kobani's heavily outgunned Kurdish defenders claimed ISIS actually controlled a slightly smaller area than first thought, but he acknowledged that the militants had made major gains in the culmination of a three-week battle. Other local sources said ISIS controls a larger area than the armed Kurdish factions claim. The Britain-based Syrian Observatory for Human Rights, which monitors the country's civil war, said the Islamic State – still widely known by its former acronym of ISIS – had pushed forward on Thursday. "ISIS controls more than a third of Kobani. All eastern areas, a small part of the northeast and an area in the southeast," said Rami Abdulrahman, the head of the Observatory. Esmat al-Sheikh, head of the Kurdish militia forces in Kobani, said ISIS had seized about a quarter of the town in the east. "The clashes are ongoing – street battles [continue]," he said.

Although Kurdish factions and the U.N. envoy for Syria claim that there will be a massacre against the civilians in Kobani if ISIS takes control of the whole town, another U.N. official said that only a few hundred inhabitants remain in Kobani. However, Kobani is important due to its geo-strategic position even though the U.S. Secretary of State John Kerry said the loss of the town would not be a strategic defeat. An explosion was heard on Thursday on the western side of Kobani, with thick black smoke visible from the Turkish border a few kilometers away. ISIS hoisted its black flag inside the town overnight and a stray projectile landed three kilometers inside Turkey.

While clashes between armed Kurdish fighters and ISIS militants continue, the U.S.-led anti-ISIS coalition continues targeting the group's positions. The U.S. intensified its airstrikes in Kobani, which were clearly visible from the Turkish border. Yet, the airstrikes have not been sufficient to stop ISIS so far. John Kirby, the press secretary for the U.S. Defense Department, confessed on Wednesday, "Kobani could be taken. We recognize that. We believe they have been effective at what they are trying to achieve. We are doing everything we can from the air to try to halt the momentum of ISIS against that town," he said, but emphasized, "Air power alone is not going to be enough to save that city. In Iraq, it is to support Iraqi and Kurdish forces on the ground so that they take the fight to ISIS on the ground inside their country," Kirby said. "In Syria, the purpose of the airstrikes is largely to remove this group's ability to sustain itself, to resupply, to finance and to command and control," he added. Kirby said that the U.S. has said on many occasions that without local ground troops, air power is limited in its impact. "As effective on the battlefield as they can be, they are not the solution here," he said. However, he also added that the coalition does not have "a willing, capable and effective partner on the ground inside Syria. That is why we are so eager to get the training-and-equipment program up and running with our partners," he said.

U.S. Central Command (USCC) said it appeared that Syrian-Kurdish fighters continued to control most of the town and were holding out against ISIS. Philip Hammond, the UK's foreign secretary, said that his country was a full partner of the coalition and was open to the possibility of extending its commitment to military action within Syria – a move he said would require parliamentary approval. "We absolutely have not ruled out playing a role in Syria. We will require further parliamentary approval if we decide that that is the right thing for us to do," Hammond said.

On Wednesday, the Pentagon in Washington cautioned that there are limits to what the air strikes can do in Syria before Western-backed, moderate Syrian opposition forces are strong enough to repel ISIS. ISIS has also seized large areas of territory in neighboring Iraq, where the U.S. has focused its air attacks on the militants. U.S. President Barack Obama has ruled out sending American ground forces on a combat mission, and Kerry offered little hope to Kobani's defenders on Wednesday. "As horrific as it is to watch in real time what is happening in Kobani you have to step back and understand the strategic objective," he said.

Obama told top military commanders Wednesday that he is confident that the U.S. will keep making progress in its fight against the ISIS, as the reality set in of a protracted military engagement with limited prospects for success. Flanked by the top military brass at the Pentagon, Obama said he was heartened to see that a broad international consensus had emerged that the extremist group that now controls much of Iraq and Syria poses a threat to world peace. He said nations across the globe have come to the conclusion that the group's "barbaric behavior has to be dealt with. This is not something that can be solved overnight," Obama said. "Our strikes continue, alongside our partners." After meeting with commanders, Obama also convened his National Security Council at the Pentagon to discuss efforts to rebuild Iraq's beleaguered military, and train and arm Syrian opposition groups that the U.S. hopes will battle the ISIS on the ground so Western troops do not have to do so.