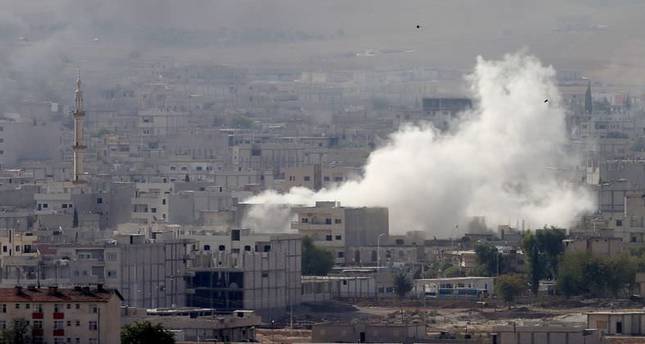 by Oct 10, 2014 12:00 am
ISIS militants captured the headquarters of Kurdish fighters defending the battleground Syrian town of Kobane Friday as a UN envoy warned of a looming "massacre" by ISIS.

Outgunned Kurdish militia were struggling to prevent the ISIS militants closing off the last escape route for the thousands of civilians still in or near the town, prompting an appeal for urgent military assistance.

US-led warplanes have intensified air strikes against ISIS fighters who have been attacking Kobane for three weeks but the Pentagon has warned that, without a force on the ground to work with, there are limits to what can be done.

Neighbouring Turkey has so far held back from any action against the ISIS militants on its doorstep, despite four straight nights of protests among its own large Kurdish minority that have left 31 people dead.

ISIS' advance has brought the front line to just 1.3 kilometres (little more than three-quarters of a mile) from the border.
IS now controls 40 percent of Kobane, according to the Britain-based Syrian Observatory for Human Rights.

"The capture of the headquarters will allow ISIS to advance on the border post with Turkey to the north of the town," its director Rami Abdel Rahman told AFP.

"If they achieve that, they will have the Kurdish forces inside Kobane completely surrounded."

As fighting raged in the strategic town, an ISIS militant on Friday carried out a suicide car bomb attack to the west of the Kurdish headquarters, the Observatory said.

There were no immediate details on casualties.

US planes conducted nine new airstrikes in Syria on Thursday and Friday, the US military said.

Two ISIS training facilities were destroyed while several vehicles and a tank were hit in the raids, in which planes from the UAE and Saudi Arabia participated, it said.

An AFP correspondent on the other side of the Turkish border saw a cloud of white smoke rising above Kobane after coalition strikes Friday.

UN envoy for Syria Staffan de Mistura appealed to Turkey to take any action it could to protect the 12,000 or so civilians still in or near the town, warning they "will be most likely massacred" if captured by ISIS fighters.

Kobane was "literally surrounded" except for one narrow entry and exit point to the Turkish border, de Mistura said.

The envoy called on Turkey, "if they can, to support the deterrent actions of the coalition through whatever means from their own territory."

"We would like to appeal to the Turkish authorities in order to allow the flow of volunteers at least, and their equipment to be able to enter the city to contribute to a self-defence operation," he said in Geneva.

The statement marked an unusual one by the United Nations, which usually strives to stay neutral in conflicts, but de Mistura explained the rare appeal by the precarious situation in the border town.

The coordinator of the US-led campaign against ISIS, retired US general John Allen, was to hold a second day of talks in Ankara after the NATO ally insisted it could not be expected to take ground action against ISIS alone.

Kobane activist Mustafa Ebdi said the ISIS militants were using civilian cars with Kurdish flags to avoid coming under attack by coalition aircraft.
He said the risk of Kobane falling to the militants was high, and described the town as a "symbol of resistance to ISIS in Syria."

"Every Kurdish fighter is willing to die," he said.

With the world media gathered just across the border in Turkey, the conquest of Kobane would be a highly visible symbolic victory for the extremists.

More than 180,000 people have been killed in Syria since an uprising against Bashar al-Assad's regime began in 2011, escalating into a multi-sided civil war that has drawn thousands of militants from overseas.

Bombardment and air strikes by the Syrian regime killed at least 21 civilians, eight of them children, in the south and northeast of the country Friday, the Observatory said.