Conference takes off in Cairo to rebuild Gaza 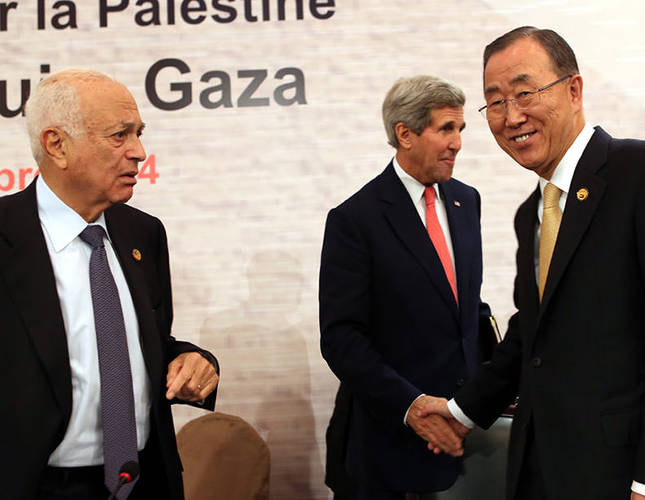 by Daily Sabah with Agencies Oct 12, 2014 12:00 am
A conference chaired by Egypt and Norway for the reconstruction of Gaza, devastated Israeli attacks, started in Egyptian capital Cairo on Monday.

Speaking at the one-day gathering in Cairo, President of the State of Palestine, Mahmoud Abbas said $4 billion was needed to reconstruct the coastal strip after the 51-day war that ended on August 27, guaranteeing the transparency for usage the funds to be allocated.

Abbas said the latest Gaza war caused "tragedies that are difficult to be described by words ... Entire neighborhoods have been reduced to rubble and 90 families are no longer listed in the civil register."

"The people of Gaza do need our help desperately, not tomorrow, not next week, but they need it now," Kerry told a Gaza reconstruction conference that kicked off in the Egyptian capital Cairo earlier Sunday.

U.N. Secretary General Ban Ki-moon and Arab League Secretary-General Nabil al-Arabi are among the representatives of more than 50 countries, 30 foreign ministers, and 20 regional and international organizations including the IMF and the World Bank.

For seven weeks in July and August, Israel pummeled the Gaza Strip with the stated aim of halting rocket fire from the Palestinian territory.

The offensive left around 2,160 Palestinians dead and some 11,000 others injured-the vast majority of them civilians-while destroying residential structures and infrastructure across the coastal strip.

The Arab League said earlier this month that it hoped to raise $5 billion at the conference for the reconstruction of the Gaza Strip.
Ever since Hamas-which Israel deems a "terrorist" organization-swept 2006 Palestinian legislative polls, Israel has imposed a land and sea blockade on the Gaza Strip.

Israel tightened the blockade further after Hamas wrested control of the enclave from the rival Fatah movement one year later.