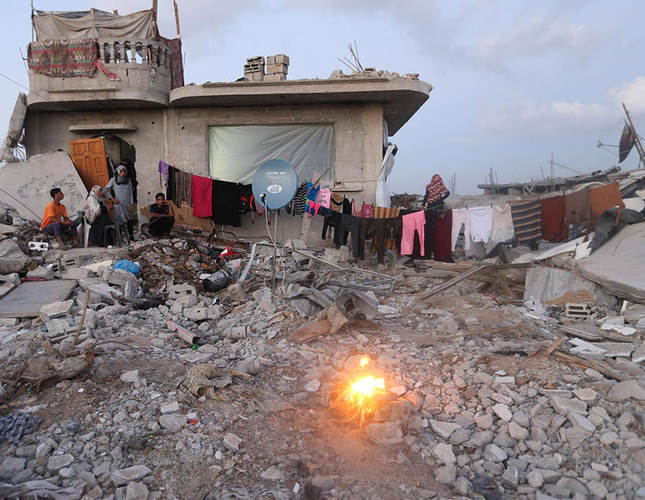 by AA Oct 12, 2014 12:00 am
U.S. Secretary of State John Kerry and Qatari Foreign Minister Khalid bin Mohammad al-Attiyah arrived Sunday in the Egyptian capital Cairo to attend a conference on the reconstruction of the Gaza Strip, due later in the day.

The meeting also tackled international efforts to combat terror and extremist groups, including the Islamic State of Iraq and the Levant (ISIL) as well as bilateral talks and issues of mutual concern, the release said.

British Minister for the Middle East Tobias Ellwood and chief Palestinian negotiator Saeb Erekat arrived earlier in the Egyptian capital to participate in the one-day meeting.

Officials from the United States, Russia, the United Nations, Mauritania and Denmark had already arrived in Cairo for the conference, according to sources from Cairo International Airport.

The representatives of 20 regional and international organizations, including the International Monetary Fund and the World Bank, are also taking part.

The Arab League said earlier this month that it hoped to raise $5 billion at the conference for the reconstruction of the Gaza Strip.
The conference, chaired by Egypt and Norway, follows a ceasefire deal signed in Cairo on August 26 by Palestinian and Israeli negotiators, which ended Israel's devastating 51-day onslaught on the coastal enclave.

For seven weeks in July and August, Israel pummeled the Gaza Strip with the stated aim of halting rocket fire from the Palestinian territory.

The offensive left around 2,160 Palestinians dead and some 11,000 others injured-the vast majority of them civilians-while destroying residential structures and infrastructure across the coastal strip.

According to Israeli figures, 68 Israeli soldiers and five civilians were killed over the same period-the highest military death toll suffered by Israel since it lost 119 troops in its 2006 war on Lebanon.