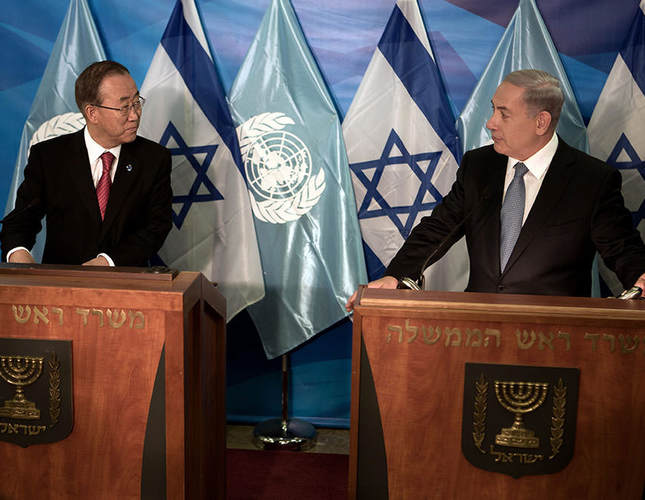 by Associated Press Oct 13, 2014 12:00 am
U.N. Secretary-General Ban Ki-moon chastised Israeli Prime Minister Benjamin Netanyahu on Monday over the issue of Jewish settlements and challenged him to show "leadership" and make compromises for peace.

The uncharacteristically harsh language by Ban came during a visit to Jerusalem, where the U.N. chief denounced Israel's latest construction move as a "clear violation of international law."

Ban was referring to an announcement by the Jerusalem municipality's two weeks ago, which said it had approved plans for the construction of some 2,500 homes in Givat Hamatos. The construction would complete a band of Jewish housing in east Jerusalem and present another obstacle to the Palestinian goal of establishing a capital in the area, which was captured by Israel in the 1967 Mideast war.

"This does not send the right signals, and I urge the government of Israel to reverse these activities," Ban said, standing next to Netanyahu. "The status quo is not tenable. It is clear the sides must return to the negotiation table with the readiness to make the tough but necessary compromises."

Then, turning to his host, Ban added: "This is the time for leadership Mr. Prime Minister - for the resumption of talks - for an end to polarization. There is not a moment to lose."

Ban's call for the resumption of talks comes as Palestinian President Mahmoud Abbas is preparing to ask the U.N. Security Council to set a November 2016 deadline for Israel to withdraw from Palestinian lands occupied in 1967, including east Jerusalem. If the U.N. bid fails, Abbas has signaled he would pursue war crimes charges against Israel.

Even after the war, tensions between the two sides remain high. On Monday, Israeli police raided a Jerusalem holy site in the morning hours, to thwart what they said was a planned attack by Palestinian rioters.

Israeli spokesman Micky Rosenfeld said police got a tip about a planned violent demonstration and entered the holy site, where they found firebombs and rocks and chased the demonstrators toward the Al-Aqsa mosque, where they barricaded themselves inside.

No one was injured in the brief clash.

The hilltop compound is revered by Jews as the Temple Mount, where the two biblical Jewish Temples stood. It is sacred to Muslims, who refer to it as the Haram as-Sharif, or Noble Sanctuary, marking the place where they believe the Prophet Muhammad ascended to heaven.

The site is the holiest in Judaism and the third holiest in Islam, and a frequent flashpoint for demonstrations.

Ban said he was "deeply concerned by repeated provocations at the Holy Sites in Jerusalem. These only inflame tensions and must stop."

Netanyahu said they were a result of "Palestinian extremists who are instigating violence" by spreading baseless rumors that Israel was threatening Muslim holy places.

The Israeli leader also touched on the Gaza war this summer, saying that its root cause was the incessant rocket fire from Gaza toward Israeli cities. He also charged that "these rocket attacks often exploited U.N. neutrality, using U.N. facilities and U.N. schools as part of the Hamas machine of terror."

"And when rockets were discovered inside U.N. schools, some U.N. officials handed them back to Hamas - that very same Hamas that was rocketing Israeli cities and Israeli civilians," Netanyahu said to Ban, who did not respond to the charge.