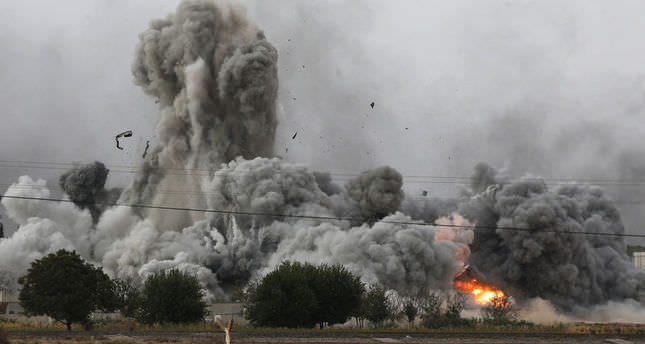 U.S. Defense Secretary Chuck Hagel warned that the situation in the Syrian border town of Kobani is still dangerous as ISIS militants tighten their grip on the embattled town

Even though the U.S.-led coalition continues to launch intensified airstrikes against the Islamic State of Iraq and al-Sham (ISIS), the militants have tightened control over the Syrian border town of Kobani. As some progress on ISIS positions has been made, the situation still remains "dangerous," U.S. Defense Secretary Chuck Hagel said on Sunday. Despite intensified airstrikes, ISIS militants still continue to hold strategic positions on the outskirts of Kobani. "We are doing what we can do through our airstrikes to help drive back ISIS," Hagel said, stressing the deteriorating situation in the Kurdish town that ISIS militants are on the verge of capturing. The violence continues to rage with more than 550 people reportedly killed during heavy clashes between ISIS militants and Kurdish fighters, according to the Syrian Observatory for Human Rights. ISIS militants started attacking the Kurdish town three weeks ago, and since then, armed Kurdish groups have been fighting in order to save their town. Yet ISIS has made significant gains as many claim that the Kurdish town is on the verge of collapse.

Since ISIS is considered a global threat, the U.S.-led coalition has conducted about 400 airstrikes in Iraq and Syria, U.S. State department spokeswoman Marie Harf said in a press briefing on Oct. 10. "We have continued to say that we will make every effort to degrade ISIS's capabilities, to take out their command and control, to go after their sources of financing with the oil facilities and to really push them back out of parts of Iraq. This is a long-term fight, and looking at any one day or any one week or any one town by no means gives a comprehensive picture of what the fight looks like or how we're going to take it on," Harf said.

"We don't see an imminent threat to Baghdad at this time. I know there's been speculation in the press about this. Iraqi Security Forces in and around Baghdad are strong. They're under constant assessment. The [U.S.] Embassy remains open and we continue to conduct business. We've deployed a significant number of our own military personnel to Iraq and to the region for the protection of American personnel and to advise and assist Iraqi forces," she added.

Regarding the ISIS presence in the Iraqi province of Anbar, she considers the situation "very fluid." She said that the U.S. military still "continue[s] to support efforts by Iraqi Security Forces, working in conjunction with the tribal fighters, directed against ISIS in Anbar."

Meanwhile, British soldiers based near the Kurdistan Regional Government (KRG) capital of Irbil began to provide military assistance to Kurdish peshmerga forces in order to support their fight against ISIS militants, as the British newspaper The Guardian reported on Sunday. According to British Ministry of Defence, "The government has previously made clear its intention to provide training to the peshmerga as part of the continued effort to assist in the fight against ISIS," Michael Fallon, the secretary of state for defence, confirmed the deployment of British troops in the northern town of Irbil.

"The defense secretary has approved the deployment of a small specialist team of non-combat army trainers, which is now in the Irbil area providing instruction on operating, employing and maintaining the heavy machine guns that were gifted by the U.K. last month," he added.