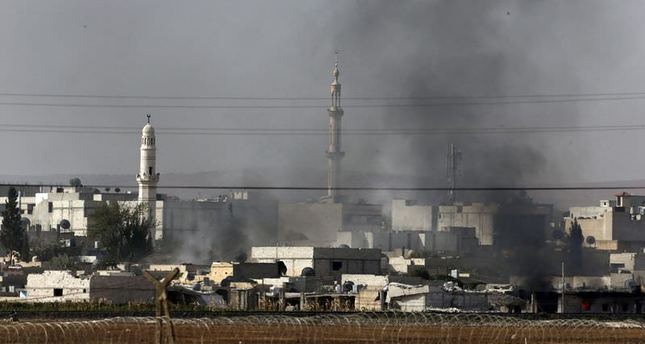 by Oct 13, 2014 12:00 am
Three ISIS militants blew themselves up on Monday in Kobani near the Turkish border with Syria, a monitoring group said, with the hardline militants making slight advances inside the besieged Kurdish town.

In one of the attacks an ISIS fighter detonated a truck laden with explosives in a northern district of Kobani, which has been the scene of heavy clashes between Kurdish forces and ISIS fighters, Kurdish sources said.

Idris Nassan, a Kurdish official in Kobani, said two Kurdish fighters had been wounded during the suicide attack.

"They tried to advance towards the (border) crossing, but the (Kurdish) People's Protection Units repelled them ... and they were not able to push forward," Nassan told Reuters.

The Syrian Observatory for Human Rights monitoring group reported more heavy fighting on Monday inside the city, where U.S.-led air strikes have so far failed to halt the militants' advance.

Rami Abderahman of the Observatory said one of the suicide attacks targeted a bus station in the northwest of Kobani and that the group had taken around 50 percent of the town.

"They now control the cultural centre, which means they have advanced further inside the town," he said.

The Observatory said there had been at least five U.S.-led air strikes early on Monday, mainly targeting southern districts of Kobani, which is known as Ayn al-Arab in Arabic.

The militant group wants to seize the town to consolidate a dramatic sweep across northern Iraq and Syria.