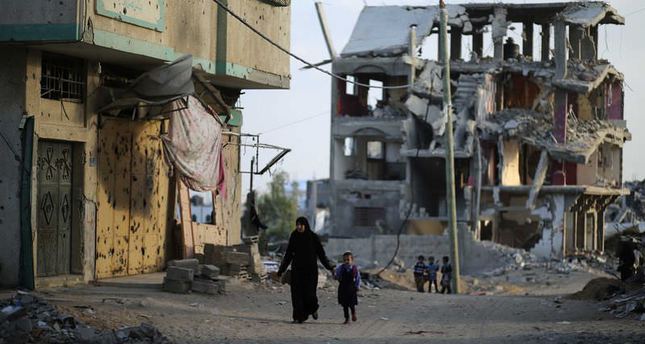 by Daily Sabah Oct 13, 2014 12:00 am
Turkey continues to send aid to the Palestinian enclave in a significant effort to help rebuild the collapsed Gaza Strip after the 51-day-long Israeli onslaught on Gaza. Turkish authorities pledged $200 million (TL 454.18 million) on Sunday for Gaza reconstruction in an international donor's conference in Cairo chaired by Egypt and Norway.

During the Gaza reconstruction conference, international donors at the conference promised $5.4 billion to rebuild the war-ravaged Gaza Strip, but all of the key participants urged for establishing a permanent peace between Israel and the Palestinians. As Gazans struggle to recover from their wounds, rebuild their city and go back to their daily life, the Gaza reconstruction conference held on Sunday aimed to mobilize efforts for the rebuilding of the embattled Gaza Strip. Palestinian President Mahmoud Abbas promised a transparent and responsible use of funds pledged at the conference while stating that $4 billion was needed to reconstruct the coastal strip.

The government of Turkey has been sending a significant amount of humanitarian aid to the Palestinian enclave since the beginning of Operation Protective Edge launched on July 7. Turkish Cooperation and Coordination Agency (TİKA) sent food and medical treatment to the Gaza Strip upon Turkish President Recep Tayyip Erdoğan's instructions.

During Israel's deadly assault on Gaza, tens of thousands of Palestinians faced a deteriorating humanitarian situation. The Israeli military offensive caused many Palestinians to seek refuge in safer areas. Apart from the death toll, which has displaced at least 425,000 people in the Gaza Strip who are now in emergency shelters according to the United Nations, nearly 12,000 homes were destroyed or partially damaged during the Israeli raids.