US holds direct talks with PKK-linked PYD on ISIS 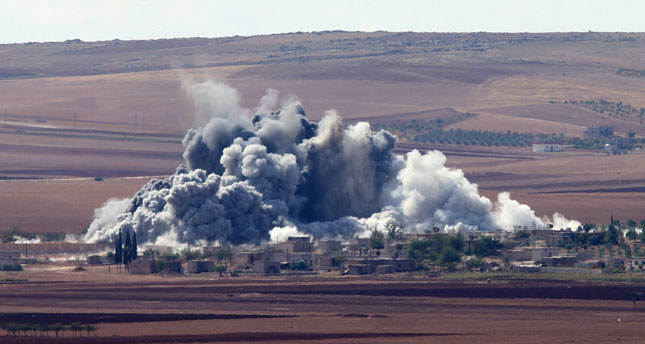 A U.S. State Department official held direct talks for the first time last weekend with a Syrian Kurdish group involved in the fight against the Islamic State of Iraq and al-Sham (ISIS) in Syria, including the besieged town of Kobani, the State Department said on Thursday. Following the talks, the last three days saw an upsurge in U.S. airstrikes on ISIS militants besieging the town, and Kurdish spokesmen said their forces were giving coordinates of the militants' positions to the U.S. "We have for some time had conversations through intermediaries with the PYD [Democratic Union Party]. We have engaged over the course of just the last weekend with the PYD," State Department spokeswoman Jen Psaki said in Washington.

A senior administration official said the talks, which involved a State Department official, took place in Paris. U.S. officials consider the talks legal as the PYD and its armed forces – People's Protection Units (YPG) – battle against ISIS, even though the PYD is the Syrian affiliate of the PKK, which is on the terror list of many countries, including the U.S., EU and Turkey. The PKK has been in a long war against Turkey with the aim of separating the southeast of Turkey to establish an independent Kurdistan that will contain Kurdish areas in Syria, Iraq and Iran. Turkey has started a reconciliation process by making investments in the area and presenting democratization packages. Despite the ongoing peaceful era, which has recently run into trouble by the PKK organizing violent protests and killing innocent people, Turkey considers the PKK and its factions as a threat and demands its allies regard its concerns of the organization.

The U.S. approves of a tactic to consolidate relations with Kurdish factions, as President Barack Obama has refused to send troops on the ground. Also, last week the Pentagon said that the airstrikes are insufficient to beat ISIS. The U.S.-backed Kurdish factions say they are defending their homeland. The U.S. is seemingly trying to please both sides, as a Pentagon spokesman on Thursday, touching on how talks over cooperation with Turkey went, said, "Very, very well." Rear Admiral John Kirby also said, "The discussions were positive, we think [...] our team's coming away with, I think, a general good report here, but I wouldn't get ahead of anything Turkey may or may not do."