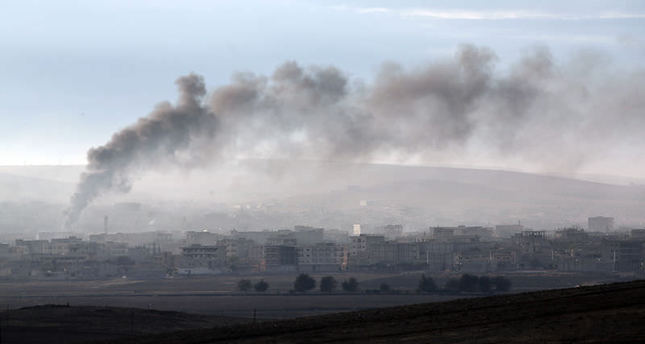 by Daily Sabah with Agencies Oct 20, 2014 12:00 am
The clashes between Islamic State of Iraq and al-Sham (ISIS) militants and armed Kurdish factions continued over the weekend and the Kurdish town, Kobani, witnessed fierce battles. The tension was escalated after a few quiet days in the town as the Kurdish fighters had pushed the militants back last week with the help of the U.S.-led anti-ISIS coalition airstrikes. However, the fiercest fighting in days shook the Syrian border town of Kobani overnight, sources inside the town and a monitoring group said on Sunday, as ISIS attacked Kurdish militants with mortars and car bombs. ISIS, which controls much of Syria and Iraq, fired 44 mortars at Kurdish parts of the town on Saturday, some of which fell inside Turkey, according to the British-based Syrian Observatory for Human Rights. It said four more were fired on Sunday. The month-long battle for Kobani has ebbed and flowed. A week ago, Kurds warned the town would fall imminently and the U.S.-led coalition stepped up air strikes on ISIS, which wants to take Kobani to consolidate its position in northern Syria. The coalition has been bombing ISIS targets in Iraq since August and extended the campaign to Syria in September after ISIS, a group that espouses a rigid interpretation of religion and initially focused on breaking the power of other opposition groups including the Nusra Front to which the group was affiliated, made huge territorial gains. Raids on ISIS around Kobani have been stepped up, with the fate of the town seen as an important test for U.S. President Barack Obama's campaign against the militants.

The Observatory also reported two ISIS car bombs hit Kurdish positions on Saturday evening leading to casualties. A cloud of black smoke towered over Kobani on Sunday. A fighter from the female units of the main Syrian Kurdish militia in Kobani, People's Protection Units (YPG), said Kurdish fighters were able to detonate the car bombs before they reached their targets. "Last night there were clashes all across Kobani. This morning the clashes are still ongoing," she said, speaking on condition of anonymity. The Observatory said 70 ISIS fighters had been killed in the past two days, according to sources at the hospital in the nearby town of Tel Abyab, where ISIS bodies are taken. Reuters cannot independently confirm the reports due to security restrictions. The Observatory said some Syrian Arab fighters from the Revolutionaries of Raqqa Brigade, which are fighting alongside Kurdish fighters, had executed two ISIS captives. "One was a child of around 15 years old. They shot them in the head," he said. ISIS has also used executions throughout their campaigns in Syria and Iraq, killing hundreds of their enemies and civilians who are opposed to their cause, according to ISIS videos and statements.

Meanwhile, at least 45 ISIS militants have been killed and 26 injured over 24 hours in airstrikes, carried out by anti-ISIS coalition in Iraq, according to health workers. At least 17 militants were killed and 26 injured in Iraq's northern Nineveh Province, Velid Jasim, a doctor at the Al-Jumhuri hospital in Mosul, told Anadolu Agency on Sunday. Other sources told AA that 28 militants were killed in similar airstrikes in Iraq's eastern Baqubah district of Diyala province bordering Iran.