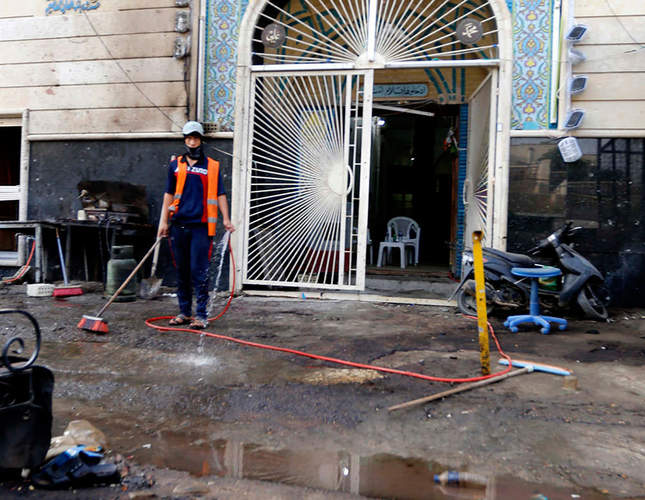 by Associated Press Oct 20, 2014 12:00 am
Militants unleashed attacks on Iraq's majority Shiite community on Monday, killing at least 33 people, the latest in relentless assaults that have challenged the Shiite-led government as it battles the Sunni-led insurgency by the ISIS group.

A suicide bomber hit a mosque in Baghdad as Shiite worshipers left after noon prayers, killing 17 people, while a triple car bombing in the holy city of Karbala killed 16.

Iraq has been plunged into its worst crisis since the U.S. troops left at the end of 2011 in the wake of the blitz by the Islamic State militants this summer.

The extremists group captured large chunks of land in western and northern Iraq, carving out a proto-state on the territory it controls between Syria and Iraq and imposing its own harsh interpretation of Islamic law, or Shariah.

Since August, U.S. warplanes have been carrying out airstrikes against the group as Iraqi and Kurdish security forces work to retake territory it has seized.

In Baghdad, the bomber blew himself up among Shiite worshipers as they were leaving a mosque in a commercial area in the city center after midday prayers Monday, killing at least 17 people and wounding 28, a police officer said.

In Karbala, three separate car bombs went off simultaneously, killing at least 16 people and wounding 41, another police officer said. The city, about 90 kilometers (55 miles) south of Baghdad, is home to the tombs of two most revered Shiite imams and the site of year-round pilgrimages. The explosives-laden cars were parked in commercial areas and parking lots near government offices, the officer added.

Medical officials confirmed the casualty figures. All officials spoke on condition of anonymity as they were not authorized to talk to media.

The attacks in Baghdad and Karbala came a day after a suicide bombing targeted another Shiite mosque in the Iraqi capital, in the western Harithiya neighborhood, killing 28 people.

No one immediately claimed responsibility for the latest attacks but they bore the hallmarks of the al-Qaida-breakaway ISIS group, which has recently claimed several other large bombings in Baghdad and elsewhere, particularly in Shiite areas.