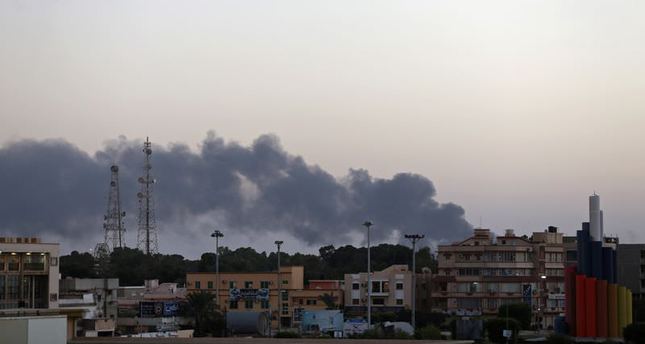 by Daily Sabah Oct 21, 2014 12:00 am
Libya has been dragged into an inextricable situation as violence continues unabated, resulting in the deaths of nine people during Sunday's fighting in Benghazi between rival militia camps Misrata and Zintan.

The ongoing violence has reportedly raised the death toll to 75 in the last five days.

Over the past six months, various militia factions have coalesced into two rival camps claiming authority over the country, posing a significant threat to Libya's political stability while undermining the government's legitimacy. Amid political instability and chaos, violence-stricken Libya has been run by two governments. One is based in the eastern city of Tobruk and backed by the House of Representatives. The other based in the capital city, Tripoli, has held legitimacy over ministries, backed by the General National Congress (GNC), the legislative authority of the country. The two governments have associated themselves with a coalition of militia forces.

However, Libya has long been suffering from the absence of central authority, leading to the emergence of powerful militias that have seized control of large parts of the country, undermining the legitimacy of the central government. Since the toppling of Moammar Gadhafi's 42-year regime, interim authorities have been struggling with the chaos, failing to impose authority, law and order, and control over militia groups, which have been partly filling the vacuum in Libya's politically chaotic landscape. The government in Tripoli has managed to maintain control over the country despite coup attempts staged by a heavily armed group allied to renegade general Khalifa Belqasim Haftar.

Regarding violence-stricken Libya's spill-over effect over the region, European powers; Germany, France, Italy and the U.K. and U.S. have stressed their concern over the operations carried out by Haftar and condemned the "ongoing violations in communities across Libya" in a joint statement released on Oct. 18. They also urged the establishment of political dialogue because "no military solution [would bring an end] to the Libyan crisis."

"We consider that Libya's security challenges and the fight against terrorist organizations can only be sustainably addressed by regular armed forces under the control of a central authority which is accountable to a democratic and inclusive parliament," the joint statement said.