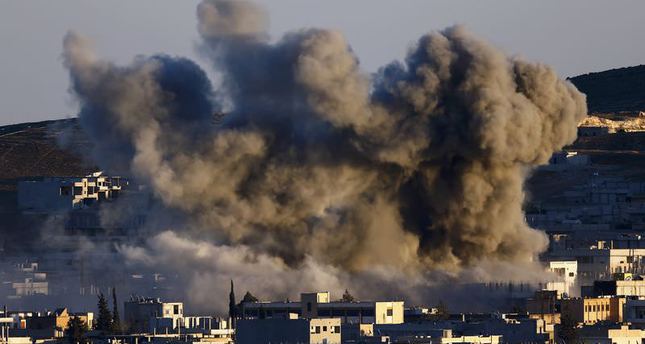 by Daily Sabah with Agencies Oct 22, 2014 12:00 am
Soon after it was announced that the U.S. had started dropping aid and weapons to the Kurds defending the besieged Syrian town of Kobani on the border with Turkey, Islamic State of Iraq and al-Sham (ISIS) militants resumed their assault. The latest ISIS attack started with a double suicide attack, which ISIS sympathizers claimed targeted the airdropped weapons.

Islamic State of Iraq and al-Sham (ISIS) militants launched a fresh assault on Kobani late Monday, hours after it was announced that Kurds, who are defending the besieged Syrian border town, had received their first U.S. airdrop of weapons. Rami Abdel Rahman, the director of the Britain-based Syrian Observatory for Human Rights, said the assault was on all fronts of the city. There were reports of heavy fighting in Kobani in the evening. The assault followed two suicide attacks in the north of Kobani earlier on Monday in an apparent attempt to cut the town off from Turkey. ISIS also sent in reinforcements from Jarabulus to the west of Kobani, as shelling of the center of the town resumed toward the end of a relatively calm day. It came as ISIS appeared to have opened up another front in Iraq with an attack on the Kurdish-controlled town of Qara Tapah which killed 10 people and sparked an exodus of half its population of 9,000. "We are afraid ISIS will encircle us and turn this town into a second Amerli," said a resident of Qara Tapah who gave his name as Haidar, in reference to a majority Turkmen town farther north that was besieged by ISIS for two months.

The Syrian Kurdish forces in Kobani hailed the airdrop, saying it would "greatly help" the town's defense against a nearly five-week-long ISIS offensive. U.S. Secretary of State John Kerry said it would have been "morally very difficult to turn your back on a community fighting ISIS." A senior administration official said the airdrop was in recognition of the "impressive" resistance put up by the Kurds and the losses they were inflicting on ISIS. Three C-130 cargo aircraft carried out what the U.S. military called "multiple" successful drops of supplies, including small arms, provided by Kurdish authorities in Iraq. The supplies were "intended to enable the continued resistance against ISIS's attempts to overtake Kobani," said U.S. Central Command. The U.S.-led coalition has carried out more than 135 air strikes against ISIS targets around Kobani, but this was the first time it had delivered arms to the town's defenders. "The military assistance dropped by American planes at dawn on Kobani was good and we thank America for this support," said Redur Xelil, spokesman for the Syrian Kurdish People's Protection Units (YPG). "It will have a positive impact on military operations against ISIS and we hope for more," he added. Xelil declined to detail the weapons delivered but said there was "coordination" over the drop.

While the Kurdish groups released the photos of the airdropped weapons on their twitter accounts, a big explosion was heard on late Monday, according to witnesses. Some local sources said the explosion happened immediately after the U.S. airdropped the weapons and ISIS militants carried out a massive attack on the Kurdish fighters. ISIS sympathizers claimed that they destroyed some of the weapons through organizing a suicide attack on the Kurds' center where the weapons and ammunition were deployed. It was also claimed that at least 20 Kurdish fighters were killed. However, the Kurdish side denied the claims.