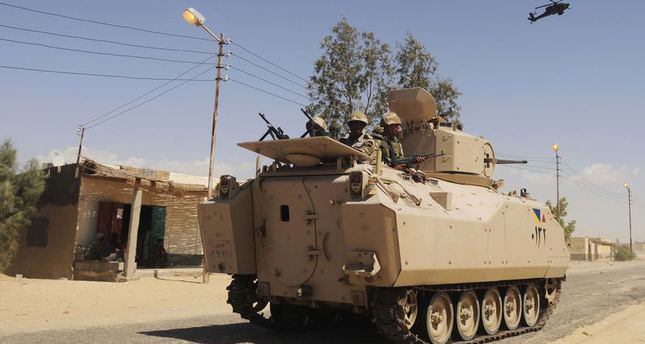 by AA Oct 24, 2014 12:00 am
An explosion rocked an army checkpoint in Egypt's restive Sinai Peninsula on Friday, leaving 26 soldiers dead and over 28 wounded, a Health Ministry official has said.

Khaled al-Khatib, head of the ministry's emergency department, told Anadolu Agency that the death toll from the car bomb that went off at an army checkpoint in Sheikh Zuweid town's Karam al-Quadis area in North Sinai had risen to 26.

Informed sources said the army had sealed off the peninsula, shutting all roads leading to the northeastern region, along with the Rafah border crossing with the Gaza Strip.

Communication services were also cut peninsula-wide, as the army launched an operation to track down the attack's perpetrators, the sources added.

Meanwhile, presidential spokesman Alaa Youssef told AA that President Abdel-Fattah al-Sisi had called a meeting of Egypt's National Defense Council to "follow up on the security situation in North Sinai" in the wake of the bombing.

A security source told AA that the bomb had gone off at a military checkpoint in the Karam al-Quadis area of the town of Sheikh Zuweid.

The blast, caused by a booby-trapped car, shook the entire town, he added.

For the past year, the Egyptian army has waged a major offensive against militant groups said to be based in the Sinai Peninsula, which shares borders with both Israel and the blockaded Gaza Strip.

The restive peninsula has seen a spate of attacks by unidentified militants on security personnel since last year's ouster of Mohamed Morsi-Egypt's' first freely elected president-by the army.