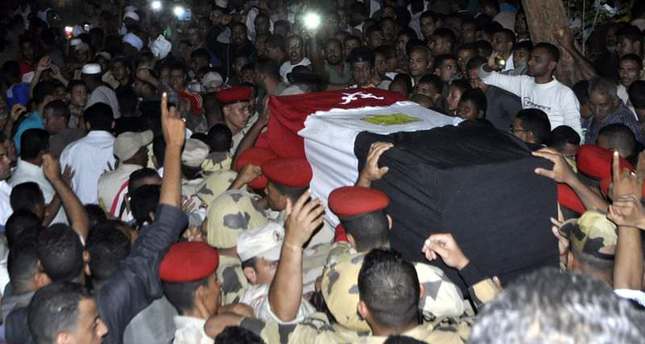 by Daily Sabah Oct 26, 2014 12:00 am
The indirect talks with Israel regarding a permanent cease-fire in the Gaza Strip, which were due to resume Monday, have been delayed by Egyptian authorities as the Palestinian representatives were not able to travel to Egypt after the closure of the Rafah crossing, cordoned off as part of security measures. "The Egyptian authorities have notified us of the delay in the talks after Hamas' delegation was unable to travel from Gaza to Egypt because of the closure of Rafah border crossing due to the security situation in Sinai," a spokesman for the Palestinian group Fawzi Barhoum told Anadolu Agency.

Following the killing of 26 Egyptian troops on Friday in an attack on a military checkpoint in the northern part of the Sinai Peninsula, Egyptian President Abdel-Fattah el-Sissi declared a state of emergency on Saturday for three months in the northeastern peninsula as well as a nighttime curfew. The Egyptian president accused "external forces" of threatening the country's "existence" by targeting stability and order. "The army and the police will take all necessary measures to tackle the dangers of terrorism and its financing, to preserve the security of the region ... and protect the lives of citizens," a statement released by the National Defense Council said while discussing the security situation in the country.

The Muslim Brotherhood movement and its Freedom and Justice Party on Saturday condemned the latest attack calling it a "massacre." Since the first democratically elected President Mohammed Morsi's ouster by the military, the Brotherhood was declared a terrorist organization that has led the country to drift into a state of chaos. After members of the Muslim Brotherhood were declared as possible targets, many brotherhood members have been arrested on charges of incitement-to-violence and joining a so-called "terrorist" group. Under President Sissi's rule, military trials for civilians have come to the fore again as he announced all protests as illegal.