ISIS accused of chemical arms use in Syria, Iraq 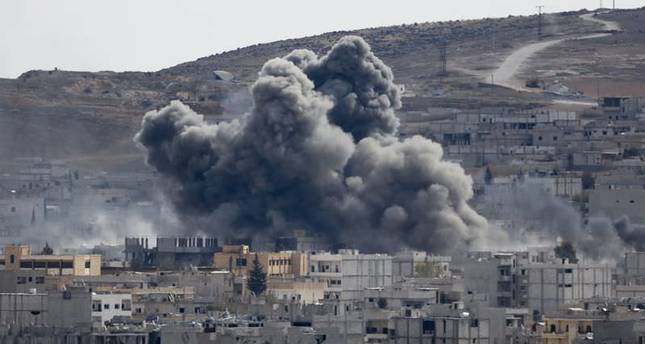 by Daily Sabah Oct 26, 2014 12:00 am
The alleged use of chlorine gas by Islamic State Iraq and al-Sham (ISIS) militants in Iraq and Syria is still of crucial importance as latest reports shows that ISIS used an unidentified chemical weapon in the Syrian town of Kobani where the battle between Kurdish forces and ISIS militants continues unabatedly. There is no confirmation of the reported chemical attack yet, there is a great potential that ISIS may take hold of some chemical weapons after seizing the al-Muthanna complex in June – located 60 miles north of Baghdad – which was one of the chemical bases of the former Iraqi dictator Saddam Hussein. The United States reportedly destroyed all the chemical weapons plants in Iraq built under Saddam Hussein's rule however, there are allegedly some ineffective and less dangerous chemical residues left in those plant which could be weaponized and cause serious injury. Some fear still remains that ISIS may pose a significant threat as the production and use of chlorine gas is quite simple.

In June, ISIS militants in Iraq seized a chemical weapons plant of former ruler Saddam Hussein that still contains a stockpile of old weapons, according to AFP. The attacks raised global security concerns due to the existing fear of terror in the Middle East. The Organization for the Prohibition of Chemical Weapons (OPCW) reported that the rebel group does not possess toxic chemical agents which could pose a threat to global and regional security. Any remaining materials in the production facilities in Iraq cannot create a functional weapon for military purposes, the officials stated.

Meanwhile, the U.S. military continued to launch airstrikes north and west of Baghdad on Sunday, while Iraqi security forces have made significant gains over areas lost to militants. The dominantly Sunni town, 50 kilometers south of the capital, was also recaptured by the Iraqi army. "Our soldiers raised the Iraqi flag over government offices and buildings in the town. It is another victory achieved against the terrorists," Colonel Muthana Khalid, spokesman of the Babil provincial police, told AP news agency.