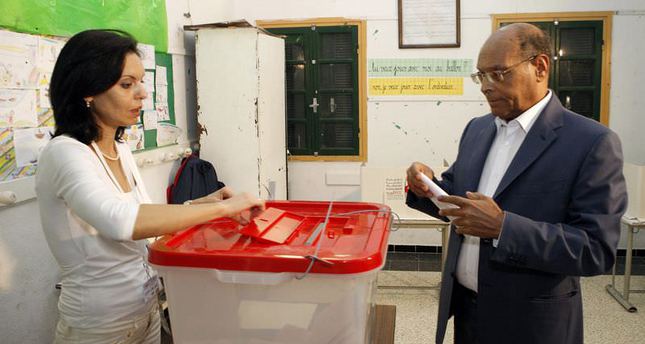 Tunisia held its first democratic parliamentary elections yesterday, with the conservative Ennahda Movement and the secularist Call of Tunisia expected to emerge as the two biggest winners of the poll.

Tunisia's political leaders have cast their ballots in the parliamentary election, which is expected to produce the first democratically-elected legislature in the North African country's history. President Moncef Marzouki arrived at a polling station in the tourist resort of al-Kantaoui where he was received by angry chants from other voters, calling on him to "leave."

Marzouki responded with flashing the "V" sign for victory as he entered the polling station. He made the same sign as he left, an Anadolu Agency correspondent reported.

Meanwhile,the leader of the Islamist Ennahda Movement, Rachid Ghannouchi, cast his ballot in Ben Arous province. Ennahda Secretary-General Ali Laarayedh also voted in the Bardo district of the capital Tunis. Elsewhere, the leader of the secular Call of Tunisia party, Beji Caid el-Sebsi, voted in the northeastern province of Ariana.

Speaking to reporters after casting his ballot, Sebsi voiced hope that the elections would take Tunisia to a "safe stage."

He also called on Tunisians to flock in numbers to cast their ballots to "show the world that Tunisia is on the right track."

Observers expect a heated race in the elections among Tunisia's political parties, but most of them agreed that the competition is limited to the Islamist Ennahda Movement and secular Call of Tunisia.

More than 5 million Tunisians are eligible to vote across the country to select 217 members of the new parliament.

In 2011, the Islamist Ennahda Movement won 41 percent of the country's 217-seat Constituent Assembly.