Education and development stressed at ATCOSS 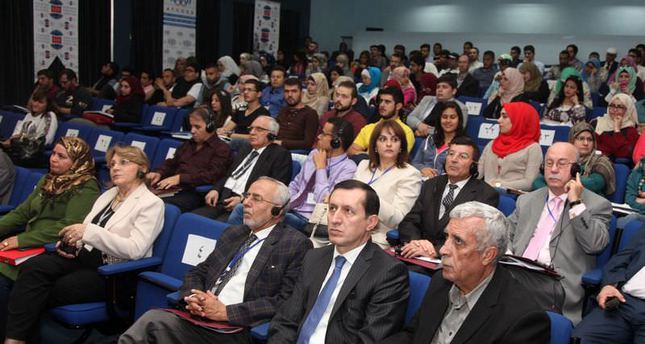 by Yusuf Selman İnanç Oct 28, 2014 12:00 am
The two-day-long fourth congress of the Arab-Turkish Congress of Social Sciences (ATCOSS) that started on Sunday gathered more than 50 academics, politicians and researchers to speak at the forum, all of whom gave presentations on several issues to dozens of people, including many students. The main points of focus on the second day of the program were education and development. Jordanian former Prime Minister Adnan Badran and Turkish former Deputy Prime Minister Emrullah İşler also attended the program. Apart from discussing scientific and technology research studies at both Arab and Turkish universities, the significance of youth was also discussed while the impacts of social media and nongovernmental organizations on both Turkish and Arab societies were compared. Some Turkish academics explained the Turkish education system, while other academics discussed the education systems and problems of Arab countries including those of Lebanon and Jordan. In the second part of the program, with the attendance of Turkish former interior minister and current Justice and Development Party (AK Party) spokesman and deputy chairman, Beşir Atalay, the cultural and academic relations between Turkey and the Arab world were discussed, giving examples from history and the present. The presenters described the problems that societies face while establishing relations. The lack of cooperation and political problems were criticized and suggested that universities and nongovernmental organizations must seek solutions to overcome the problems. In another session, the technical side of economic development, models for development and analysis of the socio-economic situation in Turkey and the Arab world were also talked about. While discussing the economy and development, the roles of women and youth were also on the table. The presenters suggested that women and youth should be more involved in the economy to increase production. Some academics gave presentations on the roots of unemployment and poverty in the Arab world.

At the end of the program, current Turkish-Arab relations were canvassed and the academics stressed that the current regional crises in Iraq, Syria, Yemen and Libya are temporary but that it is necessary for professionals to be able to grasp the nature of the problems. Both Turkish and Arab academics underlined Turkey's success in sustaining a stable economy despite the wars and clashes in Iraq and Syria. It was said that Turkey's experience, which has harmonized religion, democracy and a rapidly growing economy, must be elaborated on by Arab politicians and academics. Badran underlined the significance of developing bilateral relations on education and demanded that governments increase student exchange programs. He said: "During the Ottoman Empire, we lived together with Turks for centuries. Now, it is time to increase cooperation and re-discover each other."

Previous ATCOSS conferences were held in Istanbul last year, Cairo in 2011 and Ankara in 2010. At the end of the program on Sunday, the result that the academics reached will be shared with both Turkish and Jordanian policy makers.