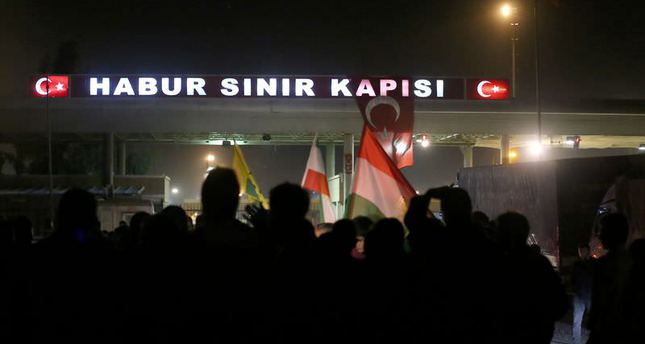 The group, who will cross into the northern Syrian town of Kobani to relieve the Syrian Kurdish forces battling against self-proclaimed Islamic State of Iraq and al-Sham (ISIS) militants, will be travelling to Kobani by land.

Another convoy of Peshmerga equipped with heavy weaponry is still on its way to Turkey.

Last week, the KRG parliament allowed 150 Iraqi Peshmerga soldiers to enter Kobani to aid in the defense of the besieged town, which has been the site of fierce battles between ISIS militants and YPG forces.

Turkish Foreign Minister Mevlüt Çavuşoğlu said two days before the KRG parliament's authorization that Turkey will allow Iraqi Peshmerga forces to pass through Turkey to Kobani as it was ratified with the Oct. 2 mandate at the Turkish Parliament.

The convoy, escorted by Turkish police and gendarmerie teams, was heading towards Şanlıurfa where they are expected to crossover into Kobani to join fighters, who have been battling the militants of ISIS since mid-September.

"All preparations are complete and the peshmerga will leave as soon as possible to help defend Kobani," Halgurt Hikmet, a spokesman for the Kurdish regional rule's ministry of peshmerga affairs, had said earlier Tuesday.

Turkish security officials have taken extensive security measures at the airport and along the entire route.