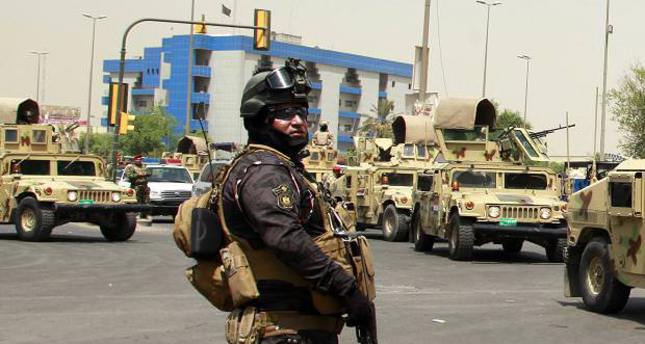 by Daily Sabah Oct 29, 2014 12:00 am
While the Islamic State of Iraq and al-Sham (ISIS) have not been beaten in Syria's Kobani despite the U.S.-led coalition airstrikes and the armed Kurdish factions, Iraqi forces have gained ground against the group in certain areas. Iraqi security forces said they advanced to within two kilometers of the city of Baiji on Wednesday in a new offensive to retake the country's biggest oil refinery that has been besieged since June by ISIS. Backed by Shia militias and army helicopters, government forces have swept through a desert area to the west of Baiji, aiming to recapture the city 200 kilometers north of Baghdad. Iraqi forces aim to recapture the Baiji oil refinery, which appears to be the biggest source of wealth for ISIS. The Iraqi forces also claim that by recapturing the oil refinery, ISIS will be prevented from easily reaching Mosul. "We have made important advances. We have taken over six villages, and now we are only 2 kilometers away from the city of Baiji," a colonel told Reuters, speaking on the condition of anonymity.

The Baiji refinery was producing around 175,000 barrels per day before it was closed, a senior Iraqi official said in June. Iraq's domestic oil consumption is estimated to be 600,000 to 700,000 barrels per day. Iraqi security forces said they had gained momentum elsewhere over the past week including retaking the town of Jurf al-Sakhar, just south of Baghdad. Government troops also retook parts of the Himreen Mountains overlooking ISIS supply lines north of the capital said another army colonel.