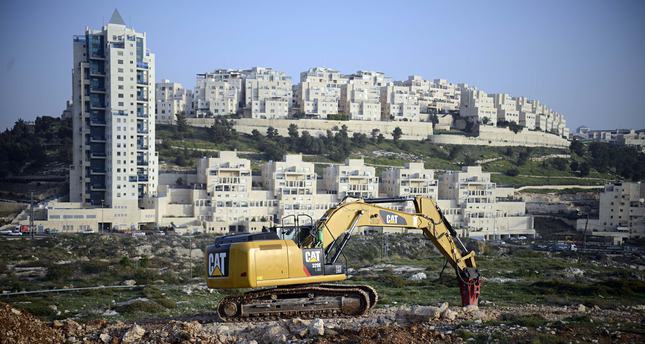 by Daily Sabah Oct 29, 2014 12:00 am
In response to Israel's latest plan to build 1,000 new flats in East Jerusalem, Palestinian authorities called on the United Nations Security Council for holding an urgent session to condemn and stop Israeli expansion in the occupied Palestinian territories in Jerusalem. The new Israeli settlement plan is consisted of building "some 400 apartments in Har Homa and more than 600 in Har Shlomo, close to Jewish "neighborhoods" of east Jerusalem. The plan has faced stiff international criticism while escalating violence between Jews and Arabs in the capital.

Israeli Prime Minister Benjamin Netanyahu rejected the criticism on Tuesday while defending the project including major construction efforts in the area and increasing the number of Jewish settlers in the enclave. "I've heard a claim that our construction in the Jewish neighborhoods of Jerusalem pushes away peace," he told reporters in the southern Israeli port of Ashdod. "Those statements are detached from reality," he added, as DPA news agency reported.

The U.S. State department spokesperson Jen Psaki stressed "deep concerns" at Monday's press briefing over Israel accelerating new settlement units saying that " [The U.S.] view settlement activity as illegitimate and unequivocally oppose unilateral steps that prejudge the future of Jerusalem. Israel's leaders have said they would support a pathway to a two-state solution, but moving forward with this type of action would be incompatible with the pursuit of peace, and that is certainly a message that we are conveying directly."

Last week, the number of Israeli Jewish settlers living in the predominantly Arab neighborhood of Silwan in East Jerusalem reportedly increased in an effort to expand Israeli influence over the enclave in Palestinian district of Jerusalem. Israeli move in the area has been escalating tension thereby triggering social unrest between Israeli settlers and Palestinians.