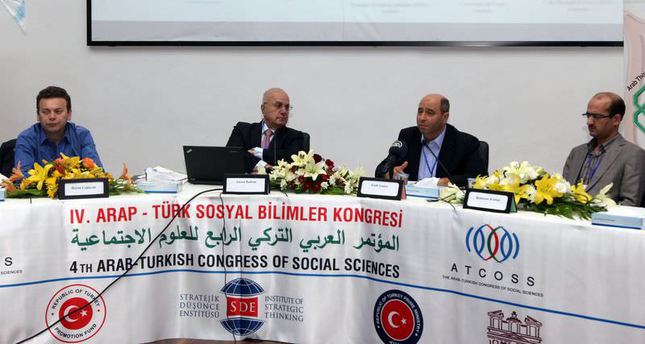 The two-day fourth Arab-Turkish Congress of Social Sciences (ATCOSS) was held over the last two days in Jordan's capital Amman with more than 50 academics, researchers and politicians in attendance. During the program the focus points were economy, education and development. Former Turkish Interior Minister and incumbent Justice and Development (AK) Party Spokesman and Deputy Chairman Beşir Atalay, AK Party Deputy Chairman in Charge of Foreign Affairs Yasin Aktay, Turkish Ambassador to Jordan Sedat Önal, Dean of the University of Petra Marwan el-Muwalla and former Jordanian Prime Minister Adnan Badran also delivered speeches on how to improve the bilateral relations between Turkey and Jordan in terms of economy and education. The speakers also underlined the importance of cooperation between not only Turkey and Jordan but also among all other Muslim countries. The speakers said cooperation does not have to be only political but should be based on several areas like education, development and expressing experiences on different issues. The unified body of Muslims prior to World War I claimed that Muslims do not need any other agent to be in contact with each other since a common cultural and historical heritage exists. More than 50 academics, politicians and researchers spoke at the forum making presentations on several issues while dozens of people, including many students, attended the sessions. This program was the fourth one as the previous ATCOSS conferences were held in Istanbul last year, in Cairo on 2011 and in Ankara in 2010.

Daily Sabah spoke with the coordinator and founder of the program, Professor Ahmet Uysal who also works as the Middle East Coordinator at the Institute for Strategic Thinking (SDE). He explained why the fourth ATCOSS was organized and said, "We have decided to establish relations with the Arab world directly, without any other information sources. We first gathered to discuss the current regional issues and bring a perspective to the problems from inside the region, instead of purporting an 'orientalist' view." In response to why ATCOSS preferred the topics of economy, education and development while the region has been dragged into a deep chaos, Uysal said, "As academics, we look at the roots of the problems. The current problems are related to the topics that we discuss. The lack of education, the high rate of illiteracy, weak economies and poverty trigger other problems like extremism, as it is easier to convince the people who suffer from poverty to join extremist groups. At this point the significance of education and a strong economy as obviously the people can be prevented from joining the extremist and marginalized groups, if the condition for an acceptable life is presented to them … Development also provides welfare to people and in developed countries radical groups cannot create a social base. Not only politically radical groups but also criminal groups attract people from less developed countries," he added.

Director of ATCOSS and head of SDE Birol Akgün said, "ATCOSS aims to bring Turkish and Arab academics and intellectuals together to discuss problems and share experiences on certain issues since these societies have lived together for centuries." Akgün, like Uysal, underlined that ATCOSS also plays a role in that Turkish and Arab academics and intellectuals directly contact each other rather than meeting in Western countries or obtaining information about each other from someone who is not from the region. When asked about the motivation behind choosing the topics while more urgent problems exist in the region like the Islamic State of Iraq and al-Sham (ISIS), Akgün said, "We as academics must look at the future and understand that not the only agenda of the region is ISIS but also education. We aim to attract attention to common and deeper problems to help create stability and permanent peace as we believe that education and development play the key role." "The U.S., Turkey, politicians and even researchers who specialize in the Middle East suffer from 'strategic fatigue.' However, we have grasped the nature of the problems," he added. In response to the criticism that Turkey's popularity in the Arab world decreased over the last year when compared to 2011 when the Arab Spring emerged, Akgün said, "When Turkey launched a new policy toward the Middle East in recent years, Turkey was expected to undertake the burden of the region. It was impossible for Turkey to solve all the problems. However, the 'Turkish model' is still on the table as Arab intellectuals attempt to understand how Turkey has been successful in amending the economy and democratizing itself." He also stressed that some Gulf countries, especially Saudi Arabia and Egypt, have launched anti-Turkey propaganda since the Turkish government has been supporting positive change in the region against the status quo.

Executive Director of the International Center for Terrorism and Transnational Crime (UTSAM) Mehmet Özkan said, "Despite the crises and wars in the region, the only country capable of bringing people together to discuss the essential problems like education and poverty, is Turkey. Despite the current problems in the region, the elements of Turkey's soft power like student exchange programs, cooperation between NGOs or exporting soap operas still continues. It shows that Turkey has a long-term vision for the region. ATCOSS has made accurate choices for the discussed topics as it reveals that Turkey's relation with the region is not only political and diplomatic but also social."

Head the Center for Middle Eastern Strategic Studies (ORSAM) Şaban Kardaş said, "The current problems in the region are related to politics and security. However, the origins of the problems have to be elaborated on. In the region, the establishment of 'state' and socio-economic development are problematic. Therefore, education and development issues must be brought to the table more frequently since the solutions for the essential problems will eradicate the others." When asked how he views the role of Turkey, politically and economically the most stable country of the region, Kardaş said, "Turkey aims to share its socio-economic and political experience that it has gained over dozens of years. The Turkish government has improved economic relations with Arab countries to help develop their economies and has also established some semi-diplomatic institutions to contribute to the state-building process by explaining how it happens in Turkey."

At the end of the program, with the participation of the attendees, a declaration was issued. It was stressed that the improvement of common education programs and consulting businessmen or seeking to invest in Turkey or Arab countries will be helpful for establishing more sustainable relations among the societies.