US strategy struggles to break ISIS siege in Kobani 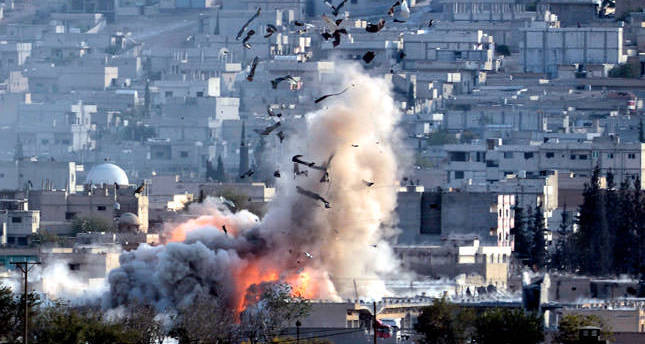 Although the U.S.-led anti-ISIS coalition continued to launch airstrikes against ISIS in Kobani, the group has not retreated and continues to battle against U.S.-backed Kurdish forces

The U.S., which has built a coalition with the aim of eradicating the Islamic State of Iraq and al-Sham (ISIS), has so far been unsuccessful in reaching its aim. The coalition has been pounding ISIS targets in Iraq and Syria, especially in Kobani, for several weeks. Besides the airstrikes, the armed U.S.-backed Kurdish factions under the leadership of PKK's official Syrian branch Democratic Union Party (PYD) and its armed wing People's Protection Units (YPG) are trying to defend the town.

However, weeks of U.S.-led air strikes on the insurgents' positions around Kobani and the deaths of hundreds of their fighters have failed to break the siege on the town. ISIS has lost little of its power and continues to attack critical points in the town. Yesterday, the militants attacked a position near the Turkish border with heavy weapons, while Kurdish forces pushed back.

Iraqi peshmerga fighters were expected to enter Kobani late on Wednesday, according to Saleh Moslem, co-chair of the PYD. The decision has the backing of Washington, who publically stated the importance of having "a partner on the ground."

The PYD, which had allied with the Assad regime that continues killing unarmed people and attacking opposition groups, including the Free Syrian Army (FSA), has claimed that it needs more weapons and aid. Therefore, it was agreed that peshmerga forces from Northern Iraq would go to the town via Turkey. Iraqi Kurdish fighters are expected to bring anti-tank and anti-armor weapons when they enter the Syrian town of Kobani to aid fellow Kurds in their fight against ISIS, which pounds Kurdish targets with tanks that were captured from the Assad regime.

Moslem said, "They are supposed to bring mainly anti-armor and anti-tank weapons. Of course, more than that they have some weapons to defend themselves also. But mostly it is mainly artillery or anti-armor, anti-tank weapons. The YPG, they are just defending. They can do it. But these armored vehicles and tanks were causing problems for them. The YPG forces could not do it with the weapons they have. So now this will give support."

U.S. State Department spokeswoman Jen Psaki told a daily briefing in Washington on Tuesday that the U.S. welcomed the intervention of the peshmerga forces.

"We have advocated and been discussing the importance of allowing the peshmerga across the border and the facilitation of that," Psaki said. "This is one component. It is certainly one that we felt would be impactful and be important to have a partner on the ground to work with," she said, adding she was unable to immediately confirm reports that the deployment had begun. The Kurdish Regional Government's (KRG) Minister of Peshmerga, Mustafa Sayyid Qader, told local media on Tuesday that no limits had been set as to how long the forces would remain in Kobani. The KRG has said the fighters would not engage in direct combat in Kobani but rather provide artillery support. Last week U.S. warplanes airdropped weapons to the Kurds.