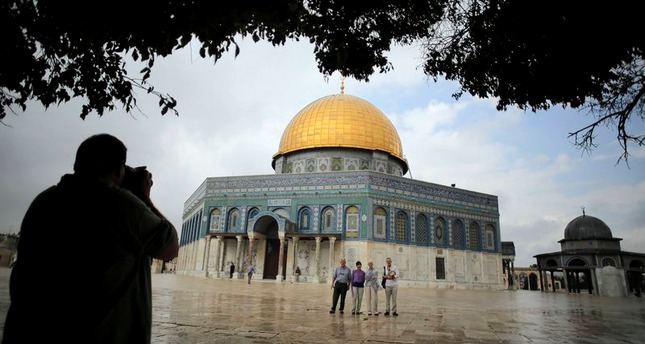 by Oct 30, 2014 12:00 am
Israel decided Thursday evening to reopen Jerusalem's Al-Aqsa mosque compound to Muslims hours after ordering its closure and following Arab and US calls for Muslim worshippers to be allowed in.

"It was decided to restore (the compound) to normal... effective immediately," police spokeswoman Luba Samri told AFP, adding that because of a fear of unrest at Friday midday prayers, entry for Muslim men would be restricted to those over 50.

There would be no restrictions on Muslim women, she said.

Samri said the decision was subject to security developments.

Israel had earlier said its closure of Islam's third holiest site, which is also sacred to Jews, was temporary and aimed at calming tempers after police shot dead a Palestinian accused of trying to kill a far-right Jewish activist.

Palestinian president Mahmud Abbas said the unprecedented closure was tantamount to a "declaration of war" and Sunni Islam's top institution, Al-Azhar, in Cairo, called it "barbaric".

The United States urged that the mosque compound be reopened to Muslim worshippers, and called on all sides to exercise restraint amid spiralling tensions in Jerusalem.