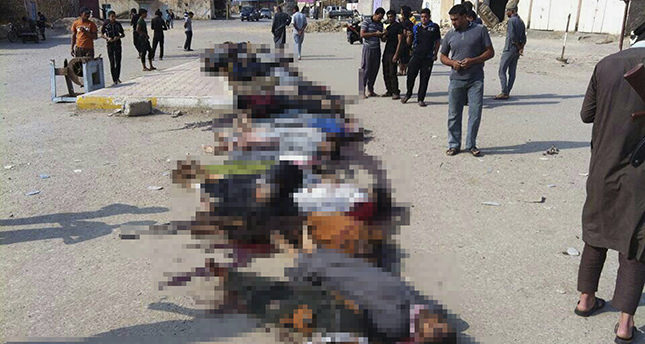 by Oct 30, 2014 12:00 am
Militants from the self-proclaimed Islamic State of Iraq and al-Sham (ISIS) group have executed at least 46 members of a tribe that fought against them in Iraq's Anbar province, sources said.

The men from the Albu Nimr tribe were killed in an area overrun by the militants last week north of the town of Heet, a local leader and a doctor said.

A police colonel and a leader from the Sahwa forces confirmed the killings, saying they took place on Wednesday.

ISIS militants have overrun large areas of Anbar, and the killings are likely aimed at discouraging resistance from powerful local tribes, who will be key to any successful bid to retake the province.

Images said to show the aftermath of the public executions were circulated on micro-blogging site Twitter, but their authenticity could not be independently confirmed.

One picture shows a long line of more than 30 men in civilian clothes lying in the middle of a street with streams of blood running over the dusty ground, as young men and children look on.

The victims are barefoot and many are blindfolded, their hands bound behind their backs.

ISIS did not immediately claim responsibility for the killings, but the group has executed hundreds of people in areas of Iraq and Syria that it controls.

ISIS spearheaded a militant offensive that has overrun much of the country's Sunni Arab heartland since June, sweeping security forces aside.
Iraqi security forces, Shiite militias and some Sunni tribesmen are fighting to push ISIS back, but have made only limited local progress so far.