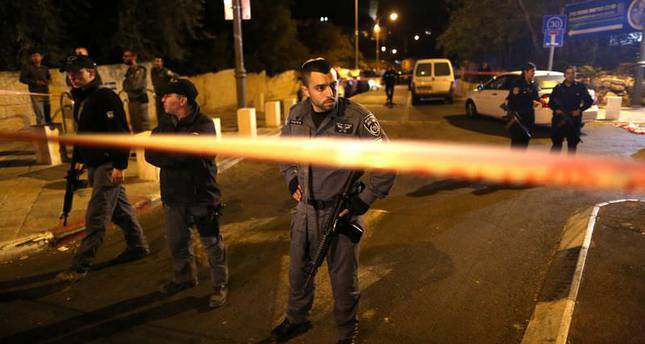 by AA Oct 30, 2014 12:00 am
Israeli forces on Thursday shot and killed a Palestinian suspect in the shooting of a far-right Jewish rabbi in Jerusalem one day earlier.

Israeli police said that Moataz Hegazi, a former Palestinian prisoner, was killed when he opened fire on Israeli forces trying to arrest him in East Jerusalem.

Local Palestinian sources confirmed that Hegazi was killed and three other Palestinians were injured in the Israeli raid.

Israeli authorities accuse Hegazi of shooting far-right rabbi Yehuda Glick, who is notorious for leading groups of Jews to force their way into the Al-Aqsa Mosque compound, in Jerusalem late Wednesday.

Following the rabbi's shooting, Israeli authorities shut the Al-Aqsa Mosque compound in East Jerusalem indefinitely for the first time since 1967.

In September 2000, a visit to the site by controversial Israeli politician Ariel Sharon sparked what later became known as the "Second Intifada"-a popular uprising against the Israeli occupation in which thousands of Palestinians were killed.

Israeli Police Chief Yohanan Danino on Thursday declared a state of high alert countrywide after an extremist Jewish rabbi was injured in a Jerusalem shooting one day earlier.

"Police forces are prepared for any scenarios," the police said on Twitter.

Israeli Police spokesman Micky Rosenfeld said that security measures had been stepped up in Jerusalem "to prevent and respond to any disturbances with emphasis on the Old City," the scene of Wednesday evening's drive-by shooting.