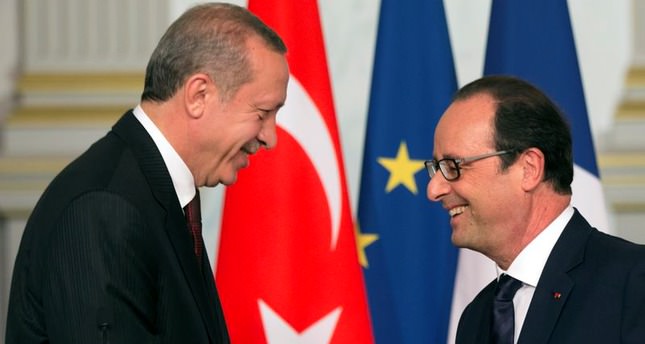 by AA Oct 31, 2014 12:00 am
Turkey's conditions for joining the US-led coalition against the Islamic State of Iraq and al-Sham(ISIS) include the creation of no-fly zones, secure zones in Syria and the training and equipping of Syrian opposition fighters, Turkish President Recep Tayyip Erdoğan has declared.

On a one-day visit to France, Erdoğan told reporters in a joint conference with his French counterpart Francois Hollande on Friday that anti-ISIS coalition countries needed to achieve the three main conditions in order for Turkey to join them.

The French President said in response: "We are going to support the three demands of Turkey."

France has previously said it supported the concepts of a no-fly zone and a safe haven on the border between Turkey and Syria in order to protect refugees coming from the town of Kobani, currently besieged by ISIS militants.

Erdoğan also questioned the drive for an "unclear" intervention in Kobani, but similar operations in other cities controlled by ISIL.

He asked: "Why just Kobani, which borders Turkey and has no civilian lefts in it? Why not Idlib or Hama or any other Syrian city under ISIS- and Bashar Al-Assad control?"

"Why not the 40 percent of Iraqi territories controlled by ISIS It is just hard for me to understand this approach," he said.

Kobani - also known as Ayn al Arab - has witnessed fierce clashes between ISIS militants and Kurdish groups since mid-September, as well as airstrikes by U.S.-led coalition forces since early August.

The Turkish president also denounced the "international media's accusation that Turkey is a pro-ISIS country".

"This is not true at all, we never support this terrorist group and we will never do," Erdoğan said.

He also emphasized that fighting ISIL would succeed only by facing the "state terrorism" of the al-Assad regime in Syria.

Hollande said his country would continue to support the Free Syrian Army against the al-Assad regime and ISIL "who are two faces of the same coin".

Their comments came after Turkey recently allowed Iraqi Kurdish peshmerga forces to pass through Turkey to reach the battle-torn town.

The first batch of Kobani-bound peshmerga troops landed on a private plane at Turkey's GAP Airport from Erbil International Airport early on Wednesday, and were stationed in the Suruc district of Turkey's border province Sanliurfa.

A separate truck convoy carrying their heavy weaponry also entered Turkey via the Habur border crossing in the southeastern province of Sirnak.

Referring to Turkey's moves to join the European Union, Erdogan said he had asked his French counterpart to lift his country's block of four chapters of the accession process as Turkey had fulfilled all the requirements for them.

Turkey, which first applied to join the bloc in 1987, must comply with 35 "chapters" of reforms.

So far, 14 have been opened, while 17 remain blocked and a further four have yet to be discussed.

Erdogan said that Hollande had given a "green light: but in a "foggy" way.

" I hope that he will be less vague so I can go back to Turkey today with the good news that those chapters are unblocked," he said.

However, Hollande said it was possible for his country to "open" the chapters, but he gave no precise date or details.

The chapters blocked by France are on "economic and monetary policy", "agriculture and rural development," "institutions" and "financial and budgetary provisions".

Turkey's EU Minister and Chief Negotiator Volkan Bozkır said during a visit to Paris on Tuesday that his country had embarked on a set of reforms in order to advance the EU accession negotiations.